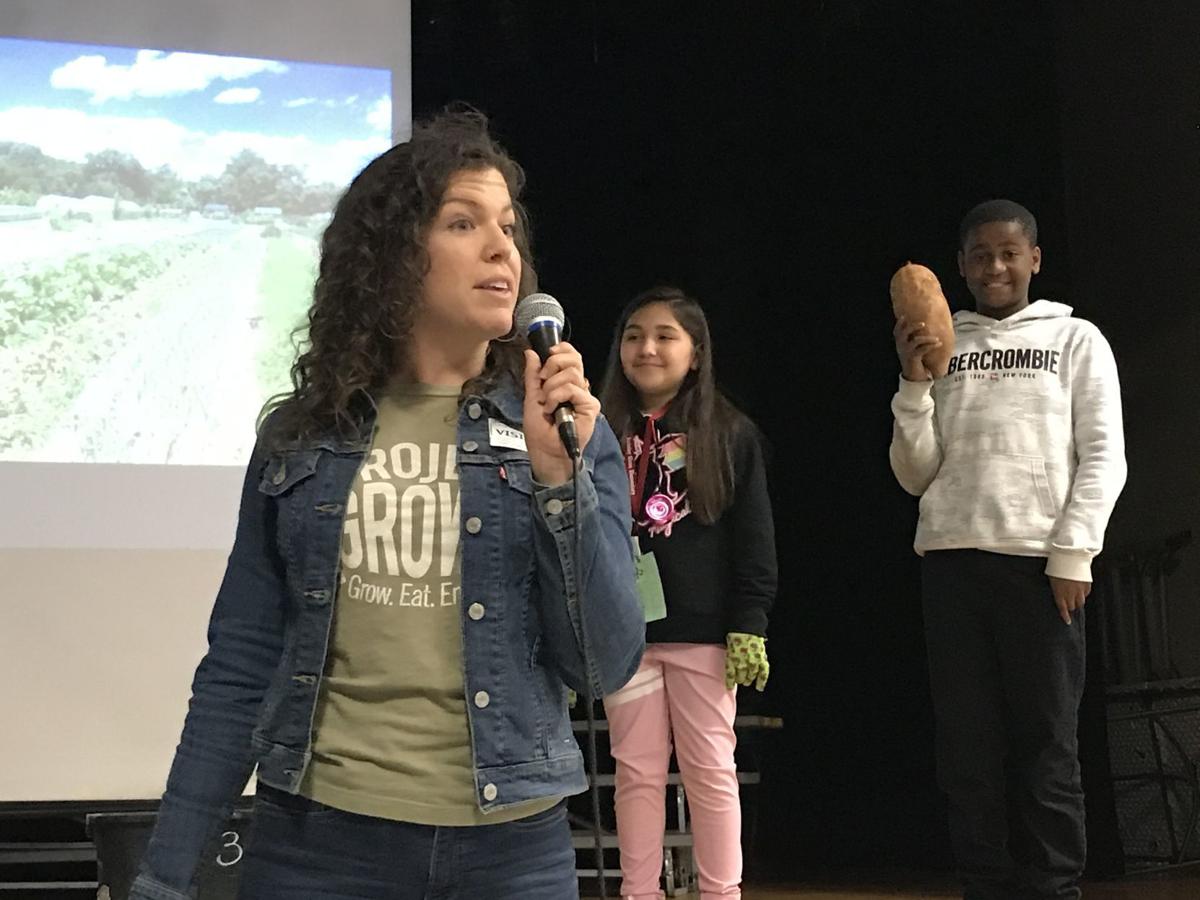 Project GROWS Farm Manager Laura Faircloth speaks to Berkeley Glenn Elementary School students at an assembly about food waste from their cafeteria being collected for compost then donated to Project GROWS’ farm on Thursday. 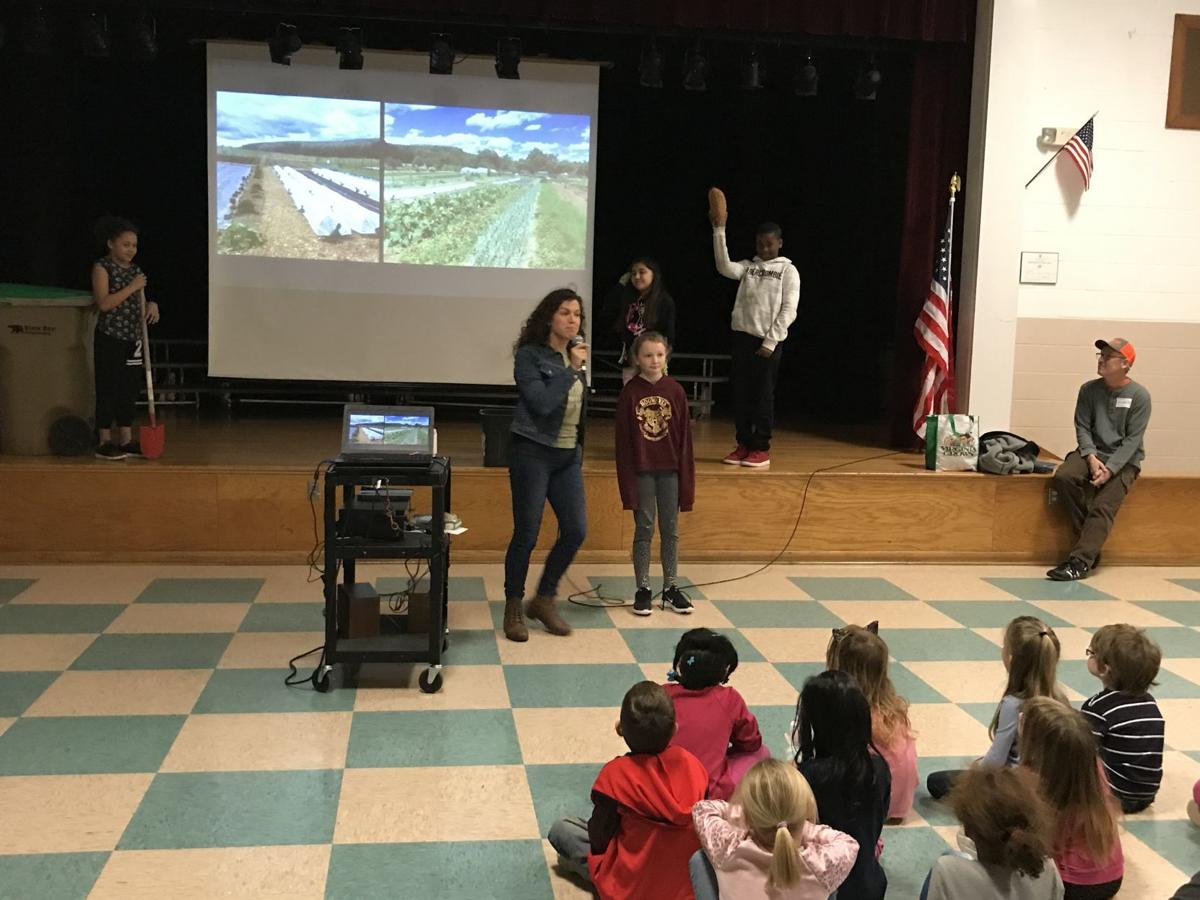 Berkeley Glenn Elementary School students listen to Project GROWS Farm Manager Laura Faircloth speak at an assembly about food waste from their cafeteria being collected for compost then donated to Project GROWS’ farm on Thursday.

Project GROWS Farm Manager Laura Faircloth speaks to Berkeley Glenn Elementary School students at an assembly about food waste from their cafeteria being collected for compost then donated to Project GROWS’ farm on Thursday.

Berkeley Glenn Elementary School students listen to Project GROWS Farm Manager Laura Faircloth speak at an assembly about food waste from their cafeteria being collected for compost then donated to Project GROWS’ farm on Thursday.

Berkeley Glenn Elementary School students in Waynesboro are learning about a productive way to use waste in their cafeteria every day, and the big impact that small actions can have on their community.

All students in kindergarten through fifth grade are participating in composting.

“The gist of it is that our students, cafeteria staff, during lunch time their food scraps are put into a big compost bin,” said Michael Freeman, a physical education teacher at Berkeley Glenn Elementary.

The compost bin will be collected by Black Bear Composting in Crimora, then donated to Project GROWS.

Other Black Bear Composting clients will be encouraged to also donate to Project GROWS, Freeman said.

“The hope is to show our kids a number of things,” Freeman said, including the importance of environmental stewardship and not wasting food.

He added that nearly 60 percent of students at Berkeley Glenn Elementary are on free and reduced lunch, so their wasting food is “kind of confusing to see.”

Eventually, the project could be used in classroom lessons in math and science.

The school also hopes to partner with James Madison University students in Harrisonburg who are majoring in environmental studies and have them visit classrooms and discuss the advantages of composting.

Freeman said he hopes the composting project enables students to come full circle with “their effect” on the environment.

“‘This was my lunch that I threw away, that I did not eat,’” Freeman said he hopes students will come to realize.

Project GROWS will be able to take the compost and make “wonderful, new vegetables,” then the vegetables will be served in Berkeley Glenn’s cafeteria.

Freeman said he would like to eventually see all Waynesboro Schools participating in the project.

“This isn’t much, and it’s not going to serve the whole farm [at Project GROWS], but, hopefully, it’s going to take some expense from Project GROWS,” Freeman said of the project.

Perhaps the project will also “influence and change the way our cafeteria works,” including what food items are served.

Lee serves on Berkeley Glenn’s Science Committee, where, he said, the idea of the composting project originated.

He said the project gives students an opportunity to get out of themselves and see that their actions have an impact on the environment. The food waste from the school’s cafeteria “can then nurture and feed your next meal,” Lee said of the project.

He added that the students had no trouble understanding what they needed to do after lunch each day and where to put their food waste and paper products.

“I think they kind of naturally get the idea that we have to take care of what we’ve been given [Earth],” Lee said.

The project has not yielded enough waste yet to compost.

“But it’s just great to have the process going,” Lee said.

Lee said the hope is to acquire grant funding for the project, as well as local business partners, and “that it can become a community effort.”

“That would be our dream — would be eventually to get all Waynesboro Schools involved in it,” Lee said.

Project GROWS Farm Manager Laura Faircloth said that fourth-grade students from Berkeley Glenn Elementary made a field trip to the farm, as have other Waynesboro students and students from Staunton City Schools.

“For Project GROWS this is a great opportunity for us to help kids understand the meaning between the food they eat in the cafeteria and the food we grow on the farm,” said Faircloth.

The composting project is another example of how students can get involved, and “another way to continue to make the connection for the kids to be part of the project.”

Faircloth added that Project GROWS is excited to see how the project goes this year.

Walter said that Black Bear Composting is eight miles from Waynesboro, which allows for the students to compost locally, then for the compost to be donated locally to Project GROWS.

“I can’t think of a better story. Who else is able to do that in such a close ecosystem?” Walter said.

The project is important for the students, Walter said, in raising awareness that “there are options if you take a step to make a big difference.”

He added that the students will probably find themselves thinking of other ways to recycle food waste in their lives, such as when they go to a restaurant with their families.

“And they’ll carry it with them forever,” Walter said.