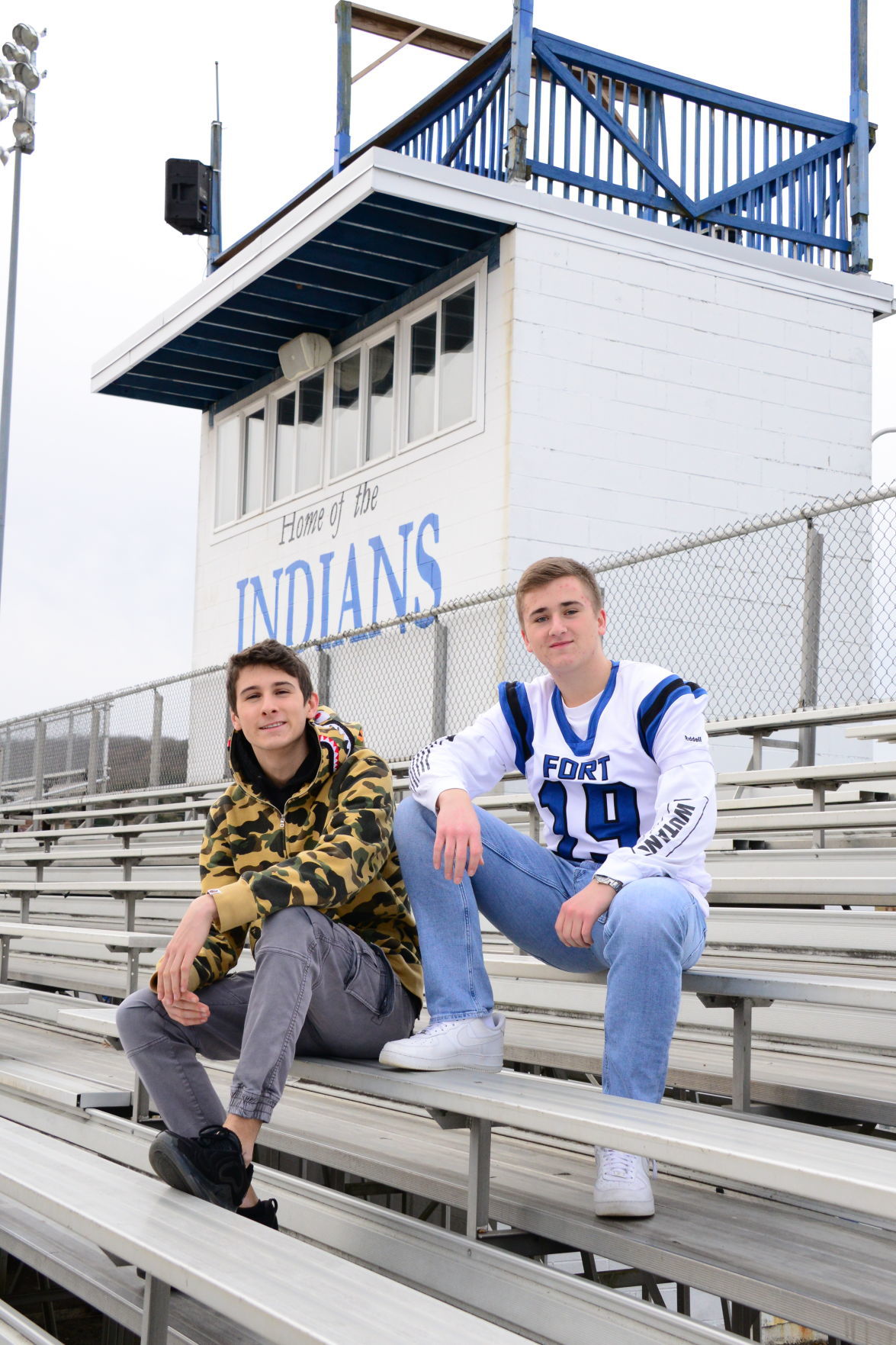 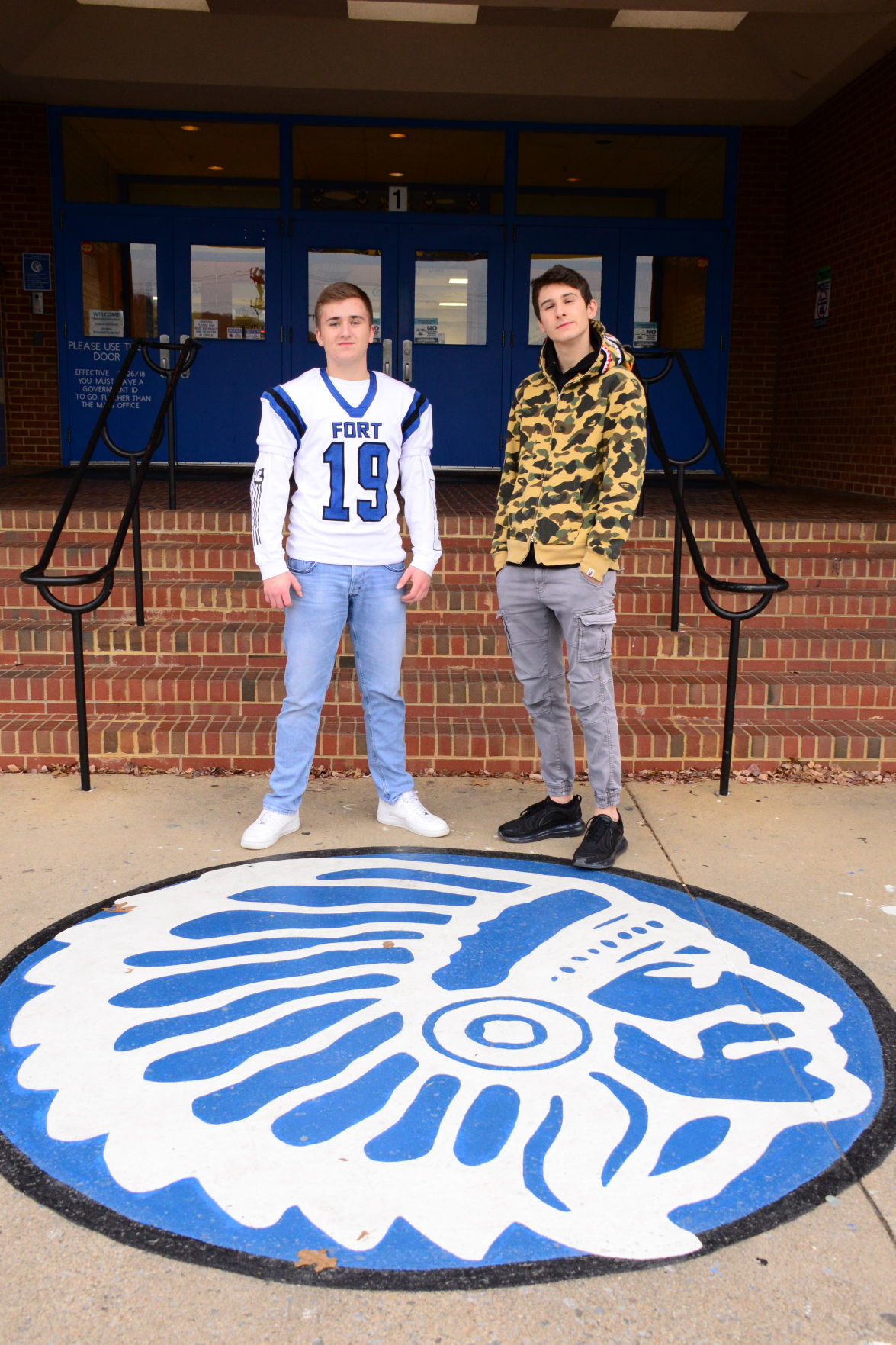 SubmittedTim Heinz Wuensch (left) from Germany and Diego Prunotto from Italy lived with the Voorhis family in Mount Sidney as foreign exchange students and attended Fort Defiance High School for the 2019-2020 academic year.

SubmittedTim Heinz Wuensch (left) from Germany and Diego Prunotto from Italy lived with the Voorhis family in Mount Sidney as foreign exchange students and attended Fort Defiance High School for the 2019-2020 academic year.

Tim Heinz Wuensch and Diego Prunotto are about to finish the academic year at Fort Defiance High School.

Then they will both catch flights to Europe.

They both came to the United States as foreign exchange students in August and lived with the Voorhis family in Mount Sidney.

Despite having an opportunity to return home as the COVID-19 pandemic struck all over the world, both decided to remain in the U.S. to finish the academic year.

“All of them encouraged us to stay here, because it’s safer to stay here than go on a plane and travel home,” said Tim, who is a junior at Fort Defiance High, of his host family, his family in Germany and the foreign exchange organization that brought him to Augusta County.

Tim said that pandemic restrictions have been stricter in Germany anyway, so he preferred to stay in the U.S.

“I definitely wanted to stay here,” he said.

However, when he returns to Germany, he will have to quarantine for a mandatory two weeks at home.

Tim’s May 28 flight home was cancelled and rescheduled to May 24.

“What really made me sad the most was I missed prom” and other Fort Defiance High events because of the pandemic, Tim said.

Before the pandemic, Tim said he was enjoying school, which he thinks is better than in Germany.

“I really, really enjoy it,” Tim said of his time at Fort Defiance High.

He got to play tennis and meet a lot of new individuals through school.

In Germany, school does not have sports and clubs.

“We don’t have a connection between students and teachers,” Tim said of school in Germany.

When he returns to Germany, Tim said he will redo his junior year of high school, but not because of the pandemic. His school in Germany will not consider his year at an American school as good enough so he will be required to repeat the academic year.

Since the pandemic, Tim has continued his education by uploading materials online.

“I did the work my teachers sent me,” he said.

He said he really liked playing football and tennis at Fort Defiance High.

“The whole spirit is different here [in American schools] too. People are proud of their school,” Tim said.

Diego said he began learning to speak and read English when he was six years old as a requirement of education in Italy.

As a senior at Fort Defiance High, Diego said that when he returns to Italy he will have one more year of school, because Italian students attend school for one more year than American students and finish between age 18 and 19.

Diego said that when the pandemic began he wanted to stay in Augusta County and finish the school year, but he does look forward to returning home to see his family and friends.

He is unsure when that will happen because his May 28 flight home was cancelled. He hopes to return home sometime after May 20.

“I really enjoy it,” said Diego of his time in the United States. He said that he enjoys learning about other cultures.

Since the pandemic began, like most American students, Diego has kept up with assignments online.

“It’s not that difficult. You just need to do the thing that they send you,” he said of online learning.

School for Diego in the U.S. has been just as different as it has been for Tim.

In Italy, school is “just a place where you learn.” Students do not participate in sports or have a prom or any special occasions associated with school.

Diego said he found the school work in the U.S. to be easier than in Italy.

“It’s easier, but maybe because the work that you have to do is less, but also the teachers teach friendly,” he said. “You become a friend with the teacher [in the U.S.]”

FredaAnn Voorhis, her husband, Dustin, and daughter, Darian Loebe, 18, a senior at Fort Defiance High, have hosted Tim and Deigo in their Mount Sidney home for the academic year.

Last year the family hosted a German boy. And next year they hope to host a German girl and a girl from Thailand, if the pandemic is over.

“It’s been a lot of fun,” said Voorhis. “It’s been interesting learning more about their cultures.”

Voorhis said that Diego taught the family how to make pizza and sauce.

“The 10 months has gone so fast,” Voorhis said.

She said she knows the boys are excited to go home to their families, and she is excited for them, but she is also sad to see them go.

“It’s kind of a mixture of emotions,” Voorhis said.

In just 10 months, Voorhis said her family was able to form relationships with Tim and Diego, and they feel like part of the family now.

Darian said she “loves them dearly.”

As host mother, Voorhis said Tim’s mother in Germany and Diego’s mother in Italy trusted her with the responsibility of taking care of their sons.

When the pandemic began, the mothers trusted Voorhis to keep their sons safe.

Voorhis said when she had masks made for the family for the pandemic, she also got masks for Tim and Diego.

In January, the family took a trip to show Tim and Diego Niagara Falls and the White House.

As the pandemic began, Voorhis said she stayed in contact with both mothers in Europe and discussed the safety of both boys.

“And, of course, with Diego — in Italy, the numbers were so high. His mom felt he would be safest [staying in Mount Sidney],” Voorhis said.

Voorhis said that as their host mother she felt the boys should stay, especially Diego.

In March, the family had planned to take a cruise together during Spring Break, but decided to cancel their cruise plans for safety reasons.

“That was probably the most stressful, because we were still trying to get to make memories with the boys,” Voorhis said.

He said he had Tim in his weight lifting class in the fall semester.

“He was really quiet and shy [at first],” said Harris of Tim when the semester began.

By the end of the semester, Harris said that Tim had begun to open up to him and his classmates, and shared with them about life in Germany.

“Tim was just a joy to have in class — not only for me, but for his peers,” Harris said.

Harris said that he came to admire the way Tim “grasped opportunities” at Fort Defiance.

“He was just an extremely teachable kid,” Harris said.

He said that Tim took constructive criticism well, and became a “great role model for his peers.”

Tim was also coachable. Before the pandemic, Tim was about to be the No. 4 of six starting players on Fort Defiance’s tennis team for spring.

Harris said that at Fort Defiance students follow what is called “the Indian way,” which means living life as you should live it.

“Tim exemplified what the Indian way is all about,” Harris said.