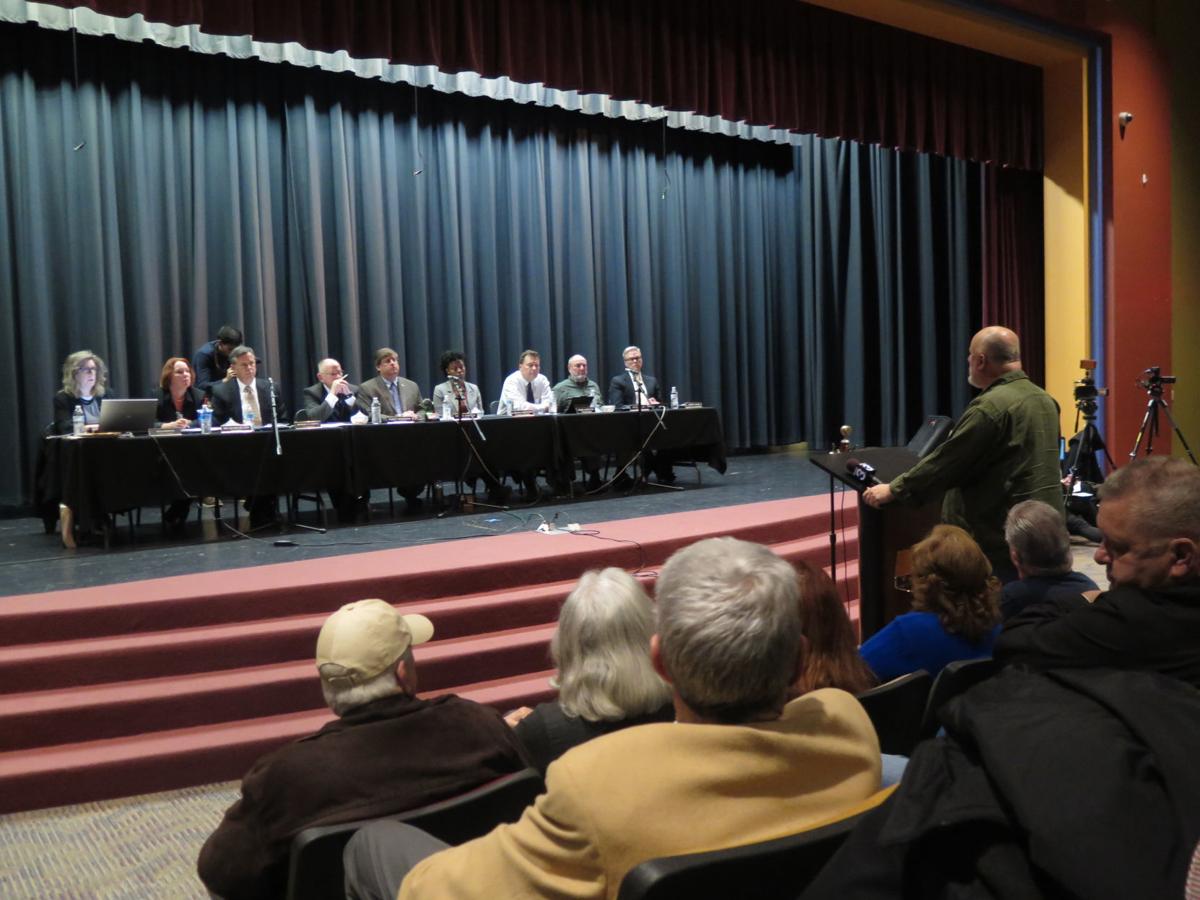 An audience at Kate Collins Middle School and members of Waynesboro City Council listen to Jim Wood voice his opinion on whether the River City should become a constitutional city on Monday, Jan. 13, 2020. 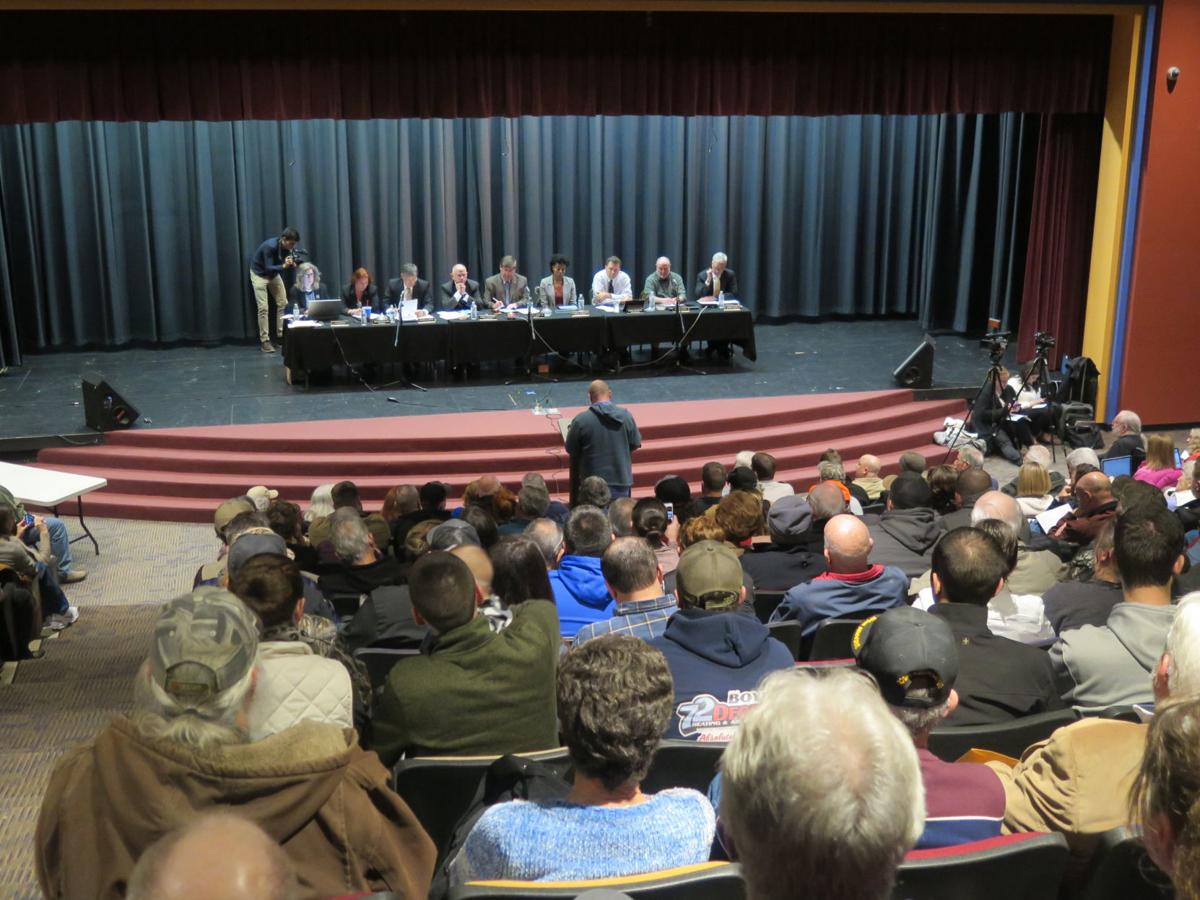 Hundreds of community members turn out to Kate Collins Middle School to hear comments from the public to Waynesboro City Council regarding whether the city should become a constitutional city on Monday. 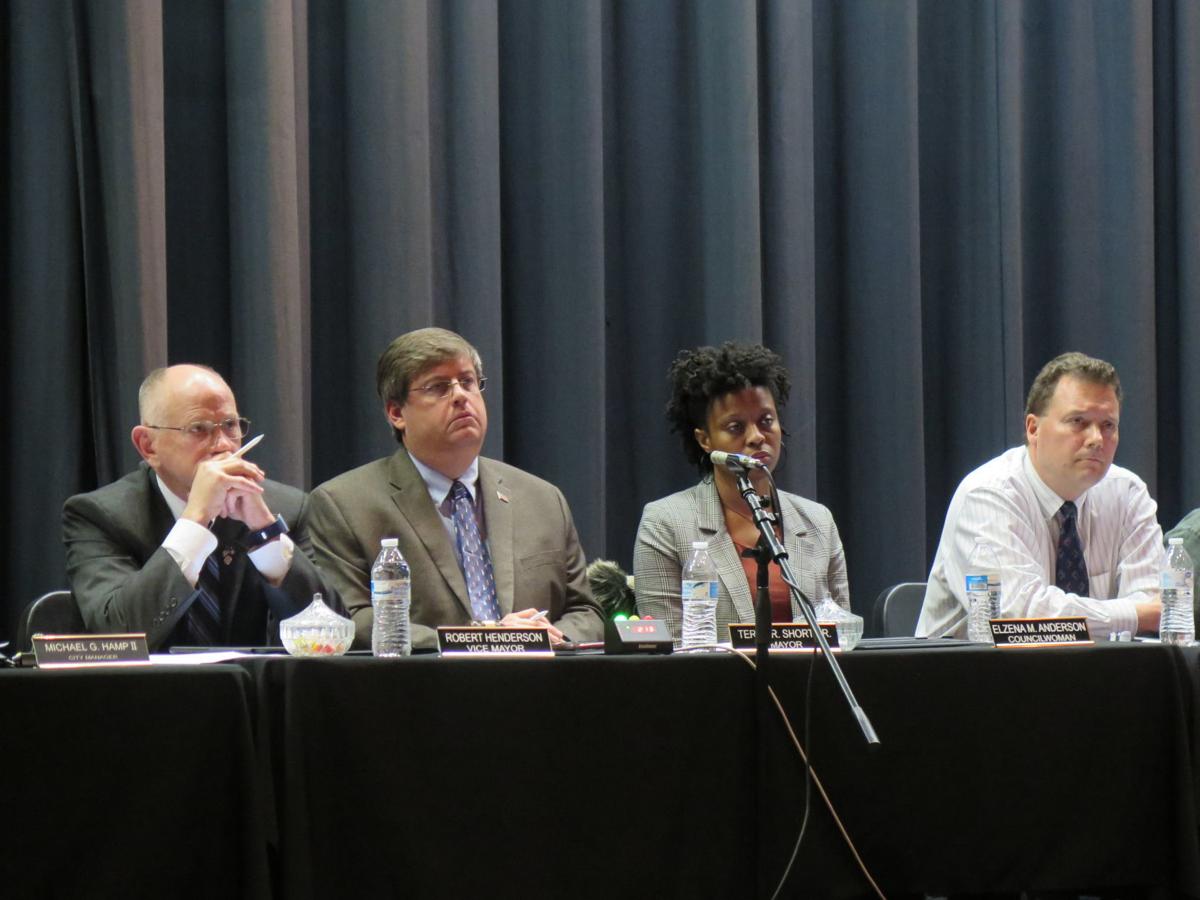 An audience at Kate Collins Middle School and members of Waynesboro City Council listen to Jim Wood voice his opinion on whether the River City should become a constitutional city on Monday, Jan. 13, 2020.

Hundreds of community members turn out to Kate Collins Middle School to hear comments from the public to Waynesboro City Council regarding whether the city should become a constitutional city on Monday.

Following weeks of listening to concerned citizens in Waynesboro both in favor of and opposed to the notion of Waynesboro becoming a Second Amendment sanctuary city, council drafted a resolution declaring Waynesboro a “Constitutional City,” wherein it expressed its intent to “uphold the Second Amendment rights of law-abiding citizens within the limits of the Constitutions of the United States, the Commonwealth of Virginia, and the laws thereof.”

“Waynesboro City Council hereby expresses its support for the rights of law-abiding citizens to keep and bear arms and urges the members of the General Assembly and the Governor to take no action which would violate the freedoms guaranteed in both Constitutions,” the original resolution read.

The initial resolution, which cited the Fifth and Second Amendments of the U.S. Constitution as well as Articles I and 13 of the Virginia Constitution in the body of its text, was brought up for public discussion before a crowd of citizens at a public hearing held Monday night in Kate Collins Middle School auditorium.

Lines of attendees flooded the sidewalks wrapping around the school as they waited for the doors to open, many Second Amendment sanctuary supporters sporting stickers declaring: “Guns save lives.” The 400-capacity auditorium was packed. Attendees were invited to continue the conversation of the ongoing debate surrounding Second Amendment sanctuary, looking to their local leaders to take some sort of action on the matter.

Cheers erupted when councilman Bobby Henderson announced that Senate Bill 16, which would have outlawed not only the purchase, transfer and selling of, but also possession of, assault-style weapons in Virginia, was defeated. Upon the announcement that Waynesboro would be declared a “Constitutional City,” not a “Second Amendment sanctuary” specifically, however, the cheers turned into boos.

“If you’ve already made up your mind, why are we here?” someone in the audience demanded.

Many in the community have continually expressed concern that their Constitutional rights would be violated if certain proposed gun legislature is signed into Virginia law. Others have rejected the label of “Second Amendment sanctuary city” as sounding dangerous and vicious, particularly to outsiders. The notion behind “Second Amendment sanctuaries” is that gun control laws viewed as “unconstitutional” would not be enforced in such “sanctuaries” within the Commonwealth, should any such bills be passed into law.

Community members who signed up to speak at the public hearing were called upon turn by turn, and the majority of them appealed to Council to use the “Second Amendment sanctuary” language rather than “Constitutional City.”

“There’s a reason the Founding Fathers added ‘shall not be infringed’ to the Second Amendment,” said Jennifer Brown, 6th District Chair of the Republican Committee. “This is not about causing a scene. This is about taking a stand.”

Nicholas Holt of Waynesboro said that the proposed “red flag laws” would stigmatize gun ownership, pushing gun owners to the fringes. Additionally, he said such laws could encourage the “anti-social behavior that can lead to the same violence they are supposed to prevent.”

Holt added that he was disappointed that council’s resolution “doesn’t really have any teeth.”

Numerous Waynesboro residents said that the proposed gun legislation would strip individuals of their ability to protect themselves against an armed individual intent on causing harm to others, or severely restrict this ability.

“When seconds count, police are minutes away” was quoted by several individuals concerned about becoming a populace totally dependent on law enforcement alone for protection.

Elaine Goss of Waynesboro said she has a son who was injured in the Virginia Tech massacre. She said that of course common sense gun laws and safety are important, but there does not need to be a ban. The idea of sanctuary is “basically nullification,” Goss said. She pointed out that when SB16 was defeated, it was not Republicans versus Democrats. Everyone on both sides agreed that that bill would violate Second Amendment rights, and thus they rejected it.

Though she expressed hope to see gun safety and common sense used in gun ownership, Goss added: “We do not have the right to nullify state or government laws.”

Numerous speakers told council that they were not asking council to defy or break state law; they were asking that council not use city resident tax dollars to enforce laws deemed “unconstitutional.”

Charles Colbertson of Waynesboro urged council not to “water [the resolution] down.” While Virginia citizens cannot pick and choose which laws they comply with, and while the designation of Second Amendment sanctuary has no true legal power, it still sends a strong message to state and federal government, he said.

Colbertson’s remarks reflected that of many others requesting council to add more “meat and muscle” to the resolution.

Katrina Crawford of Waynesboro said she rarely ever speaks, much less before large forums, but felt that there is a “time and a place to stand up.” She took her stand by thanking council for declaring Waynesboro a “Constitutional City.” She thanked them for not being “bullied into doing something that is not right.”

Though the withdrawn Waynesboro resolution expressed support to protect citizens’ right to bear arms “to the greatest degree possible,” and that council members have taken an oath to uphold and defend the U.S. and Virginia Constitutions, it also explained legal limitations of city officials’ authority over the matter.

The resolution stated that Waynesboro City has no “legislative or regulatory authority related to ‘the purchase, possession, transfer, ownership, carrying, storage or transporting of firearms, ammunition, or components or combination thereof,’” adding that it also “has no authority over the independent execution of the duties of the constitutional officers involved in law enforcement.”

Henderson fired back after dozens of speakers took their turns, telling attendees that Richmond is where the issue and full legal power lies, not Waynesboro City Council. Much of the audience went into an uproar and shouting matches ensued.

“I listened to you. Listen to me for a minute,” Henderson said.

Short said after the meeting that it is unclear whether or not another resolution will be considered in the future.

The full resolution may be read online at waynesboro.va.us/AgendaCenter/City-Council-1.

The meeting can be streamed on the “Waynesboro VA” YouTube channel at: youtube.com/channel/UCxPGE-c0B8mvJdNtFFKJ-uA