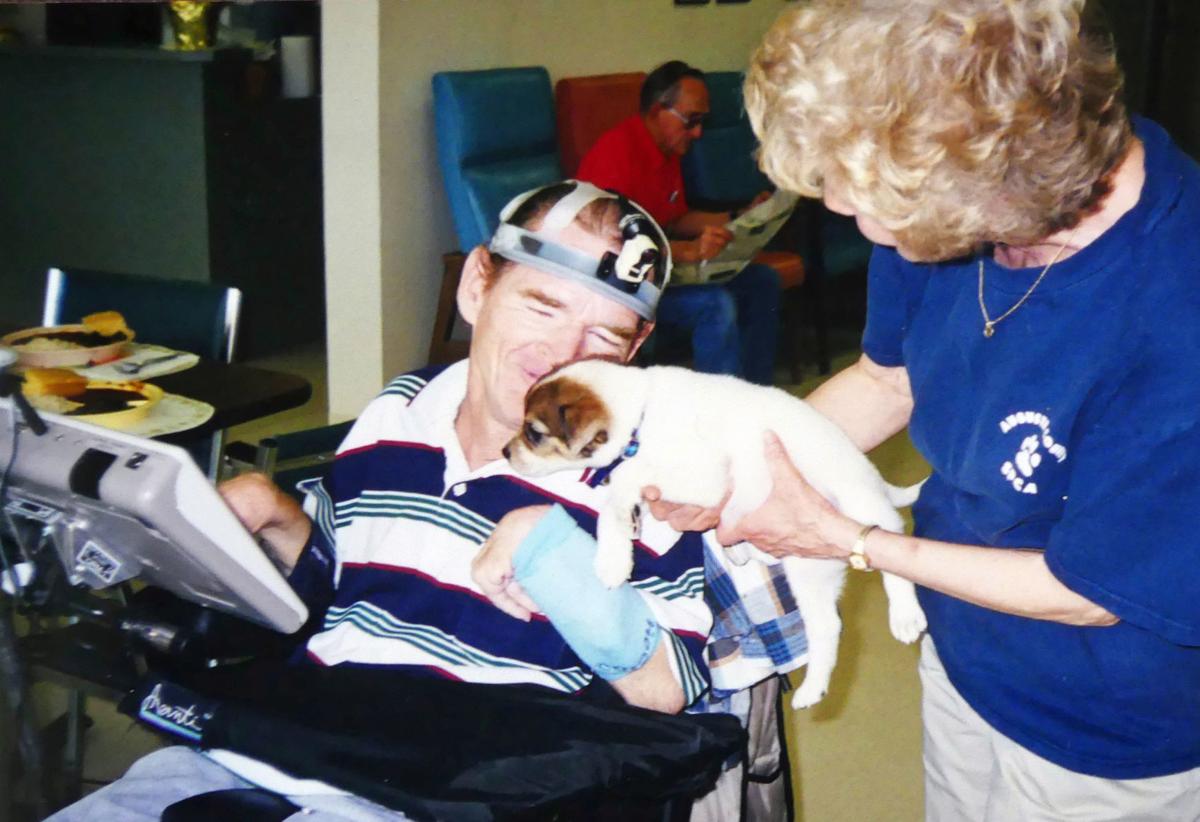 A client at the Daily Living Center gets some affection from a puppy. 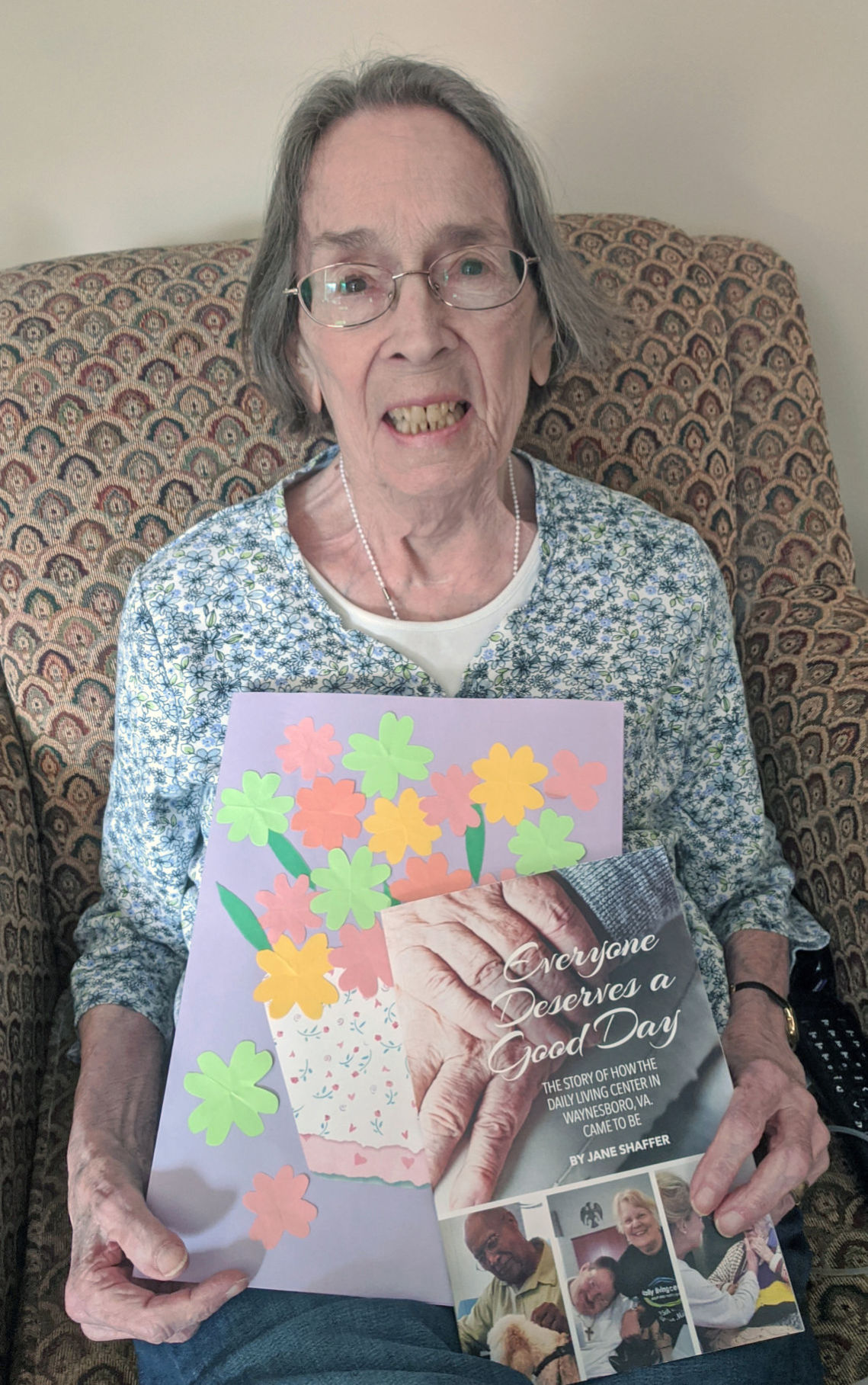 Author Jane Shaffer holds up her new book, “Everyone Deserves a Good Day,” about the history of the Daily Living Center in Waynesboro.

In May the Daily Living Center in Waynesboro celebrated its 30th anniversary. During that celebration, volunteer Jane Shaffer soaked in the festivities and then began thinking back to 1987 and a time when there was no place such as an adult day health care center where people with special physical and cognitive needs could spend the day safely and enjoyably while their caregivers gained some much-needed respite as well.

Because she has been a part of the center since the beginning, Shaffer went home pondering a way to make sure the story of how the center came to be was not forgotten. Soon she began writing and the end result, “Everyone Deserves a Good Day: The Story of How the Daily Living Center in Waynesboro, Va. Came To Be,” which is now available for sale at the Daily Living Center.

November is national caregivers’ month so the book makes its debut at the most appropriate time of the year.

The title of the book refers to the fact that the center provides a good day both for the special needs adults who spend their time at the center as well as those who are the caregivers to those daily living center clients.

“Caring for a seriously ill loved one is a difficult job. It is unlike any other job as the day never ends, and there are no vacations,” explains Shaffer in Chapter 10 of the book.

Shaffer, who has been a part of the facility since its inception, notes that she is thrilled with the book and the good reception that it is getting.

“It has been a little like giving birth,” she said of the process of writing and publishing the book. “I am really pleased with the way it has turned out. Everybody has been intrigued by it.”

The story she tells in the book is how the center was the idea of one woman, Dot Main, who was the president of the Waynesboro Women’s Club in 1987.

“In the spring of 1987 the Waynesboro Women’s Club, with the support of Valley Program for Aging Services Inc., began plans for an Adult Day Care Center to serve primarily residents of Waynesboro and the surrounding area. An assessment confirmed the community needs for such a service,” she writes in her book.

Shaffer goes on to tell how the club, led by Main, formed a task force, raised money, and finally opened to the public during a snowstorm in late 1988.

Drawing from her mother who was a writer of poetry and her father who was a college athletic coach, started writing the story in the form of an athletic event. The result is a story told like it is a baseball game. She speaks of people stepping up to the plate and of others hitting home runs.

In her last chapter she notes that “This is a game that will never end. No rain delays are possible, although an occasional snow storm might cause the center to close for a day just as it delayed the opening day in 1988.”

Although the book only takes the readers through the first few years of the center, it helps readers understand why the center is important to both the clients and their families and why it continues to be important.

And from the beginning Shaffer has been a part of the story.

“In 1987 my husband Bill and I retired to Waynesboro and I was looking for something to keep me busy,” remembers the 88-year-old.

And the rest is history. She has been playing the piano at the center every week since then and twice was even employed at the center when she was filling in as activities director.

Shaffer noted that the success of the Daily Living Center is something of which the community should be proud.

“My husband and I traveled around the country and not many communities have something like this,” she said.

Today the center is open five days a week from 7:30 a.m. until 5:30 p.m. Staff and volunteers provide a safe and secure environment where families can drop off their loved ones knowing that they will have socialization, activities, medical care, meals and snacks. The center also hosts a caregivers’ support group.

Leigh Ann Quesenberry, the director of the center, says that Shaffer is an important part of the center and the book means a lot to the center’s community.

“Shaffer has been a faithful and devoted volunteer, playing the piano for our participants every week since the center opened in 1988. She is more than just a volunteer, she is truly like family here! When she first approached me about writing a book on the history of the center as a possible fundraiser, I was just thrilled. As a non-profit agency, we depend heavily on the generosity and support from our greater community. We are grateful for Shaffer, her many years of volunteer service, and for this book, ‘Everyone Deserves a Good Day.’”

The book is well illustrated with plenty of pictures featuring the center from its inception to the present. One of the particular subjects highlighted in the book is the story of the Golden Mile, the unique annual fundraiser sponsored by the center.

“I loved doing the book and am proud of my work at the Daily Living Center. I have gotten to know a lot of nice people,” Shaffer said.

Although she is the author of the book, she is quick to point out that it all goes back to the vision of Dot Main and the community that embraced the concept of an adult day care center.

“The clients and caregivers may not know it, but each smile on their faces is a tribute to her,” she said.