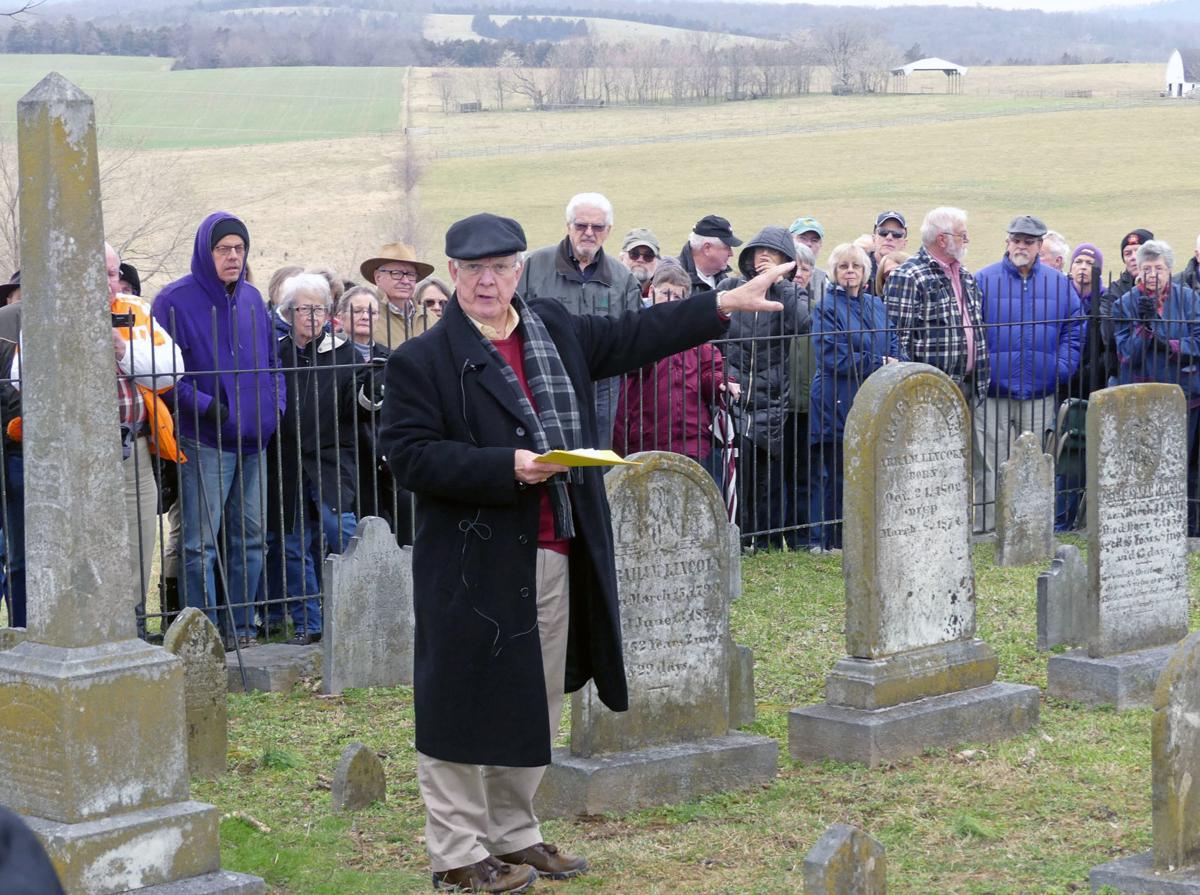 Phil Stone stands amongst the headstones of President Abraham Lincoln’s relatives in a cemetery near Linville in Rockingham County on Wednesday, Feb. 12, 2020.

Nancy Sorrells writes stories about sports and history, including an occasional column, for The News Virginian.

LINVILLE — For Dr. Phil Stone, a Harrisonburg lawyer and the past president of Bridgewater College, the date on the calendar of Feb. 12 holds no mystery. He has been in the same place on that same day for the last 45 years.

Wednesday was no different.

At 2 p.m. he found himself in a small family cemetery atop a hill just off Rt. 42 in Rockingham County near the community of Linville. As always, he was there to honor the memory of U.S. President Abraham Lincoln (born Feb. 12, 1809).

That’s correct, President Lincoln, the great emancipator, had relatives during the Civil War who fought for the South and who owned slaves. It was a fact of which both the president and the Virginia cousins were well aware.

The story, as told on the historical highway marker near the cemetery and the Lincoln homestead, goes like this: In 1768 John and Rebekah Lincoln moved their family of nine children from Pennsylvania into the Valley. They settled on a 600-acre tract of land on Linville Creek.

At that time, this was part of Augusta County and the Augusta County courthouse today still contains many Lincoln records, including that land transaction for the farm where the cemetery and homestead are today.

John and Rebekah, who are buried in the cemetery, were President Lincoln’s great-grandparents. Their eldest son, Abraham, was the President’s grandfather. Captain Abraham Lincoln served in the American Revolution.

Rockingham was formed from Augusta in 1778. That same year, Captain Abraham Lincoln had a son, Thomas. After the Revolution, in 1782, the captain’s relative and friend, Daniel Boone, encouraged Captain Lincoln to move to the western frontier, a place called Kentucky.

And that is how President Abraham Lincoln came to be associated with Kentucky. His father was that boy, Thomas, born in 1778, who moved with his family to the frontier when he was about four years old.

Stone gradually became aware of the entire Lincoln saga and its local Lincoln connections when he married a Rockingham County woman whose family farm bordered the Lincoln homestead where the cemetery is located. The Stones eventually lived in his wife’s home place and his curiosity about the Lincoln connections grew. That was a half century or more ago.

One day about 45 years ago, Stone was sitting in the local Woolworth shooting the breeze with Judge John Paul when the subject of the Lincoln connections came up. The pair decided they should do something on Lincoln’s birthday (Feb. 12) to commemorate those connections. They agreed to meet in the cemetery and thus a tradition was born.

And, while Judge Paul has made most of the birthday events, Stone hasn’t missed a one. That’s because, he says, he and Paul agreed to each read something at the inaugural event. Paul didn’t bring anything to read and Stone did, so the burden of running the event has fallen on Stone ever since that first meeting.

It is a task he loves. Over the years he has delved deeper and deeper into the Lincoln family tree, tracking down clues and connections all over the country. He even founded the Lincoln Society of Virginia, a group that helps document the Lincoln connections in Virginia and holds an annual symposium on some aspect of Lincoln history.

Holding an event outdoors in February is always a gamble and Wednesday was no exception. The air was damp and raw with temperatures in the low 40s under an overcast sky. Toward the end of the program, rain began to fall. This was great weather, Stone joked, considering what he has seen in past years.

One year there was 36 inches of snow and the only two beings in the cemetery were Stone and his St. Bernard dog Shasta who had accompanied him as he trudged through the snow from his nearby farm. Another year he and Judge Paul were holding forth with their annual event when through the mists an apparition appeared of a tall man wearing a stovepipe hat. The startled men soon learned that the man was a Lincoln reenactor and not the ghost of the president himself.

There was one thing quite different about this year’s event. Instead of a few loyal celebrants, several hundred folks crowded around the cemetery, some coming from as far away as California, to hear Stone wax eloquent about the event and the Lincoln genealogy.

Many had been to 20 or more of Stone’s events, and there were more than a few in the crowd who were also Lincoln relatives. Part of the reason for the increased crowd was due to the fact that the early 19th-century Lincoln homestead located a few hundred yards away and built by the President’s great-uncle, Jacob Lincoln, was also open for viewing.

After standing vacant for years, the historic landmark has been purchased by Sarah and Benjamin Bixler, former Eastern Mennonite students who are returning to the area. They have plans to restore the house to its former glory and make it their family home.

“It is important to us to make this a place of education for the community,” noted Sarah Bixler.

Following Stone’s comments in the cemetery, the crowd stood in long lines, eager to see inside the house and happy to hear that the local landmark was being saved.

Stone, too, expressed his joy at the prospect of the restoration. “Jacob Lincoln was a wealthy man and the house is going to be spectacular when it is restored. It was there and standing when President Abraham Lincoln was born in a hovel in Kentucky. The contrast is interesting,” he said.

As he spoke of the Lincoln story, Stone pointed out why this history is important to learn.

“It is worth honoring any President of the United States because it is a part of our rich history,” he said. “We also want to commemorate Lincoln and make sure people know about the local connections and this history.”

He pointed out that the Lincoln family story is much like all of our stories during the Civil War—of a country and families split apart, but coming back together again as one.

“By honoring him, we can focus on the character of a President and leader: his humility, his selflessness, his kindness, and his ability to turn the other cheek in order to keep the country together. Lincoln was able to keep his eye on the ball and do the right thing, while letting his ego fall to the bottom of the heap,” he concluded.

Nancy Sorrells is a freelancer for The News Virginian. She mostly writes about history and sports.