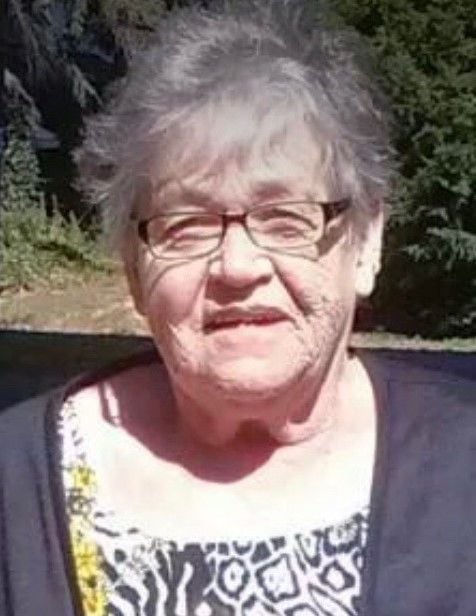 June 8, 1945 - Wednesday, May 20, 2020 Joyce (Claytor) Ann Henderson, 74, of Buckboard Road, Waynesboro, Virginia, passed away on Wednesday, May 20, 2020, in Augusta Nursing and Rehabilitation Center in Fishersville. Mrs. Henderson was born in Waynesboro on June 8, 1945, a daughter of the late Delbert David and Gertrude (Shifflett) Claytor. Joyce was a member of Rejoicing Life Church and was active with the Rejoicing Life Food Pantry. She was an avid corn hole player, enjoyed playing cards, doing word search puzzles, and in her younger days playing softball. In addition to her parents, she was preceded in death by two brothers, David Mitchell Claytor and Billy Claytor, and a sister Joan Claytor. She was the last surviving member of her family. Surviving are two sons, Jeffrey Wayne Henderson and his wife, Gina of Stuarts Draft, and Jamie Henderson of Waynesboro; a daughter, Rhonda Kay Rodeffer and her husband, Darrin of Fishersville; six grandchildren, Seth, Morgan, Brett, Cory, Tiffany, and Heather; and six great-grandchildren, Layla, Skyleigh, Coral, Aralynne, Parker, and Benjamin. A Celebration of life will be conducted at 1 p.m. on Saturday, May 23, 2020, in the Rejoicing Life Church, 116 Draft Avenue, Stuarts Draft, Virginia by Pastor Mike Lawson. "The church will be following the current COVID-19 guidelines." It is suggested those desiring make memorial contributions to the Stuarts Draft Rescue Squad, Post Office Box 260, Stuarts Draft, Virginia 24477 or the Augusta Health Foundation, c/o Hospice of the Shenandoah, Post Office Box 1000, Fishersville, Virginia 22939. The family would like to express a special "Thank you" to the staff of Augusta Nursing and Rehabilitation Center and Hospice of the Shenandoah. Coffman Funeral Home and Crematory, 230 Frontier Drive, Staunton, is in charge of her arrangements. Condolences may be expressed to the family online at www.coffmanfuneralhome.net.

March 21, 1949 - Wednesday, May 20, 2020 Calvin Leon Eppard, 71, husband of Jenanne "Nan" Eppard, of Churchville passed away on Wednesday, May 20, 2020, at his residence. He was born in Elkton, the son of the late Otis and Norwood Ruth Eppard. In addition to his parents, he was preceded in death by his sister, Barbara Moubray. In addition to his wife of 28 years, he is survived by his daughter, Kimberly Davis and husband, Glenn of Elkton; son, Chad Eppard and wife, Valerie of Shenandoah; stepson, Scott Schuler of Fargo, North Dakota; and five beloved grandchildren, Addison and Beckett Eppard, Connor and Riley Davis, and Madison Schuler. Also surviving are his sister, Karen Trail of Roanoke, brothers, Bobby (Linda), Chester, and Alan (Tina) Eppard, and a special nephew, Daryl Eppard all of Elkton. Calvin shared and passed on his love of nature and wildlife to all who were close to him. His ashes will be scattered at a later date in a natural setting according to his wishes. In keeping with his desire that no one go hungry, memorial donations may be made to Blue Ridge Area Food Bank, P.O. Box 937, Verona, Virginia 24482. The family would like to express special thanks to Dr. James LaGrua and Kathy Kennedy, nurse with First Choice Hospice for their kindness and care. Coffman Funeral Home and Crematory, 230 Frontier Drive, Staunton, is in charge of his arrangements. Condolences may be expressed to the family online at www.coffmanfuneralhome.net.