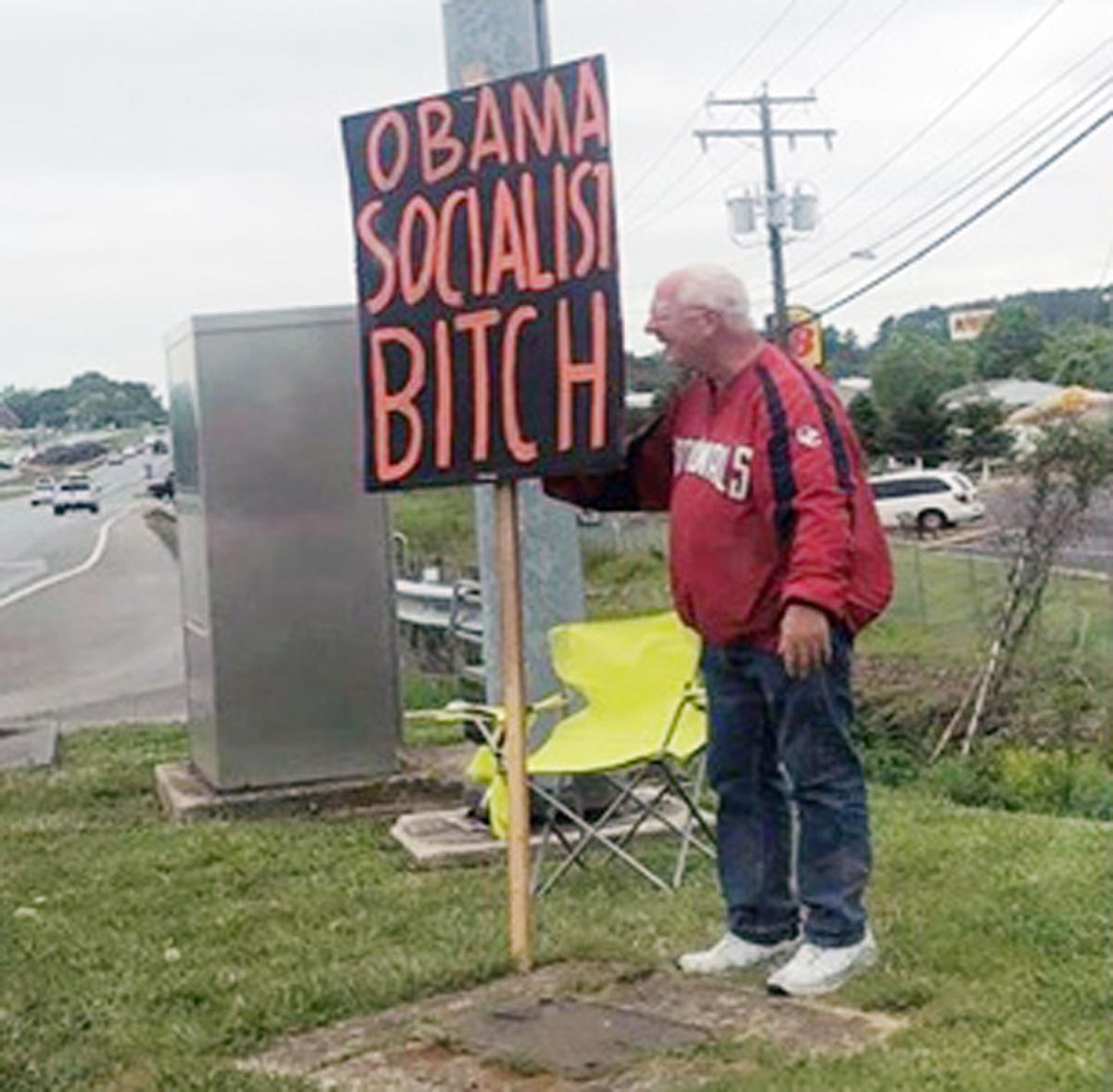 A man on the corner of Rosser and DeWitt avenues in Waynesboro holds a sign recently complaining about President Barack Obama.

Tracy Pyles, a former chairman and member of the Augusta County Board of Supervisors who lives in Augusta County, is a columnist for The News Virginian. His column is published Saturdays.

At the intersection of Rosser and DeWitt avenues in Waynesboro attention is often demanded by your standard-looking old white guy. With his homemade sign standing tall, this fellow informs all who look his way he is no fan of former President Barack Obama or present Speaker of the House, Nancy Pelosi. Nothing unusual about this around here.

But when he punctuates his dislike by calling Obama a “socialist bitch” and Pelosi the same, except leaving out the “socialist,” the message goes from disagreement to disagreeable.

An old white guy casually, publicly, denigrating an accomplished man of color and a woman of high achievement by calling them animals is not a new thing. But neither is it a wholesome thing.

The Augusta County area I grew up in was a civil, generous, community. I remember nothing as crude as this ever displayed. The ugliness of Jim Crow, “whites only” signage, was not here, to my knowledge. I am not saying the county was “progressive” as defined today, but it was overwhelmingly respectful.

When panhandlers, loiterers or potty-mouthed seniors set-up shop in our road right-of-ways people wonder if this is appropriate, safe, or even smart. Local governments are then tasked to listen to their citizen’s complaints but be guided by the Constitution. This can be a challenge.

Some years ago the Augusta County Board of Supervisors sought to end roadside panhandling by ordinance. We heard from many who felt unsafe, uncomfortable, with an ever growing panhandler presence. But there were also speakers in opposition, particularly members of a Waynesboro church, noting hardships that sometimes require folks to ask for help.

I was conflicted. Most folks who contacted me were in favor of the ordinance. But I couldn’t convince myself that I, or anyone else, had the right to restrict such basic freedoms as the right to congregate and the protection of free speech in this grand land.

While I have read a number of comments, from folks truly bothered by the tone of these particular signs, few have suggested shutting the old man down. I think this right.

This in part is due to the question as to where it all ends. This fellow’s signs are in poor taste offending many. But they are no more uncivil than signs saying, “Trump Lies, People Die.” Like it or not, free people demand to be heard in the manner they choose to speak.

Protesting in this country started boldly when tea was dumped in Boston’s harbor. In my lifetime protests have been a constant.

I was nine, yet remember the TV accounts of fire hoses and dogs being unleashed on black protesters in 1957 Birmingham, Alabama. In 1969 I was stationed in Charleston, South Carolina, when hospital workers went on strike seeking union recognition. I was witness to 100 days of protests, mass arrests, curfews and a military occupation bringing national attention to a dignified city brought to its knees by internal strife.

On May 4, 1970, an anti-Vietnam War protest at Kent State led to the Ohio National Guard being ordered to shoot. The result was the death of four students and the wounding of another nine. Just over two years ago a right wing protest in Charlottesville brought a near riot and a senseless death.

In the scheme of things our fellow, in his mall walking shoes, is of little note best managed by indifference. Or as suggested in The Declaration of Independence, caution and patience in preference to continual action and reaction:

“Prudence. Indeed, will dictate that Governments long established should not be changed for light and transient causes, and accordingly all experiences hath shewn, that mankind are more disposed to suffer, while evils are sufferable, than to right themselves by abolishing the forms to which they are accustomed.”

President Obama is already out of office. And If Speaker Pelosi is to be removed it will not be by flipping the local Congressman — Ben Cline is already opposed to the lady. So is there even a purpose to the Rosser Avenue rant? Or is Shakespeare instructive here that this is “a tale told by an idiot, full of sound and fury signifying nothing?” (Oh the grandeur of a Buffalo Gap education)

In summary, take comfort in knowing that “The dogs bark at the wheels but the caravan rolls on.”

Tracy Pyles, a former chairman and member of the Augusta County Board of Supervisors who lives in Augusta County, is a columnist for The News Virginian. His column is published Saturdays. He can be reached at tcpylesjr@hotmail.com.