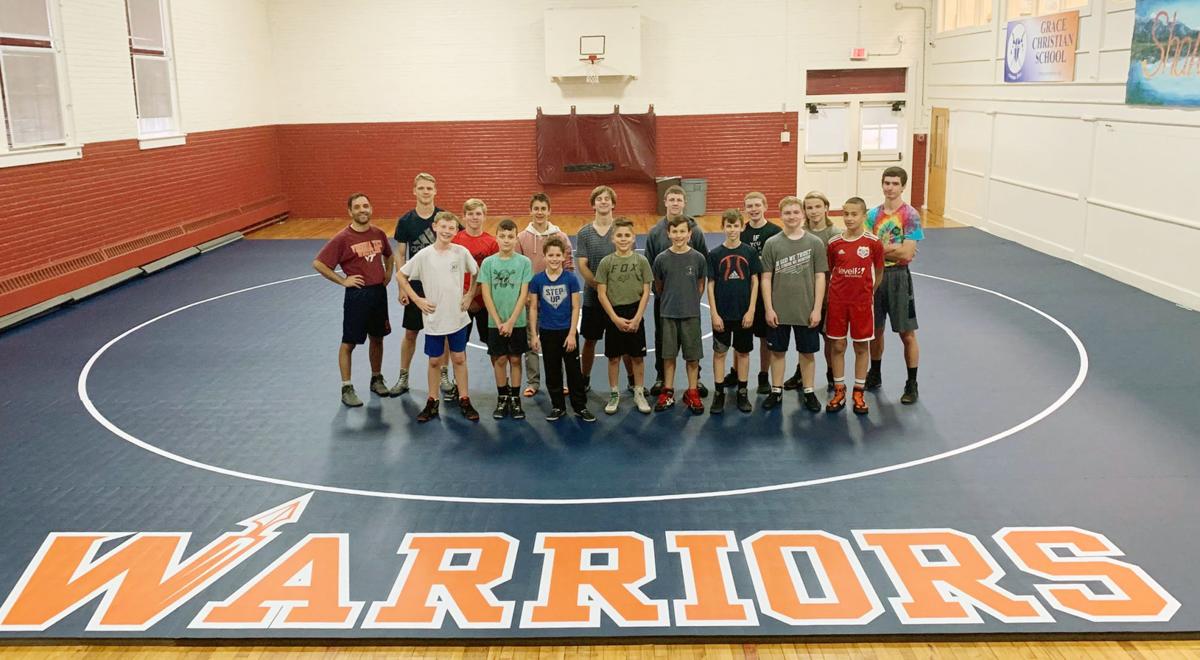 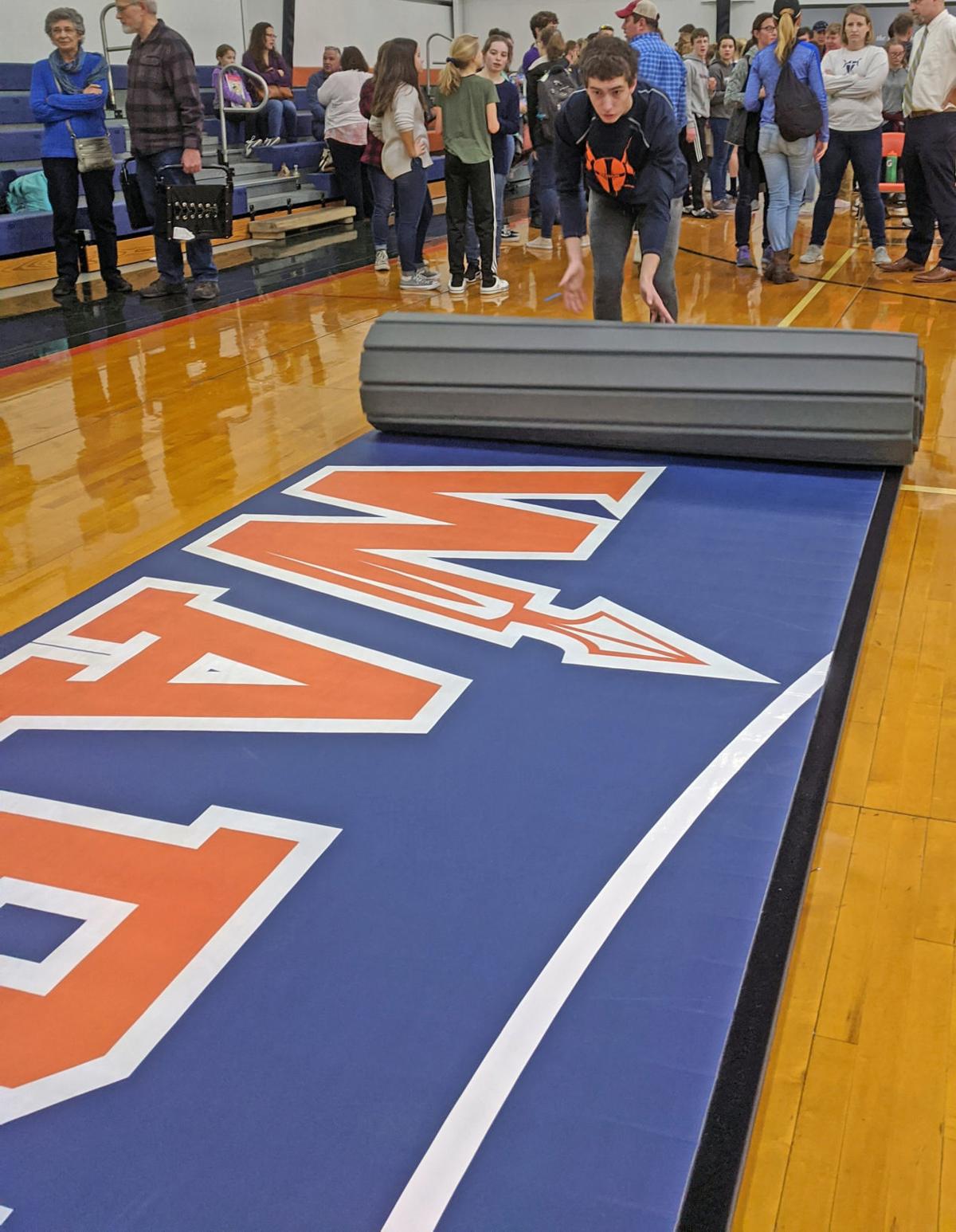 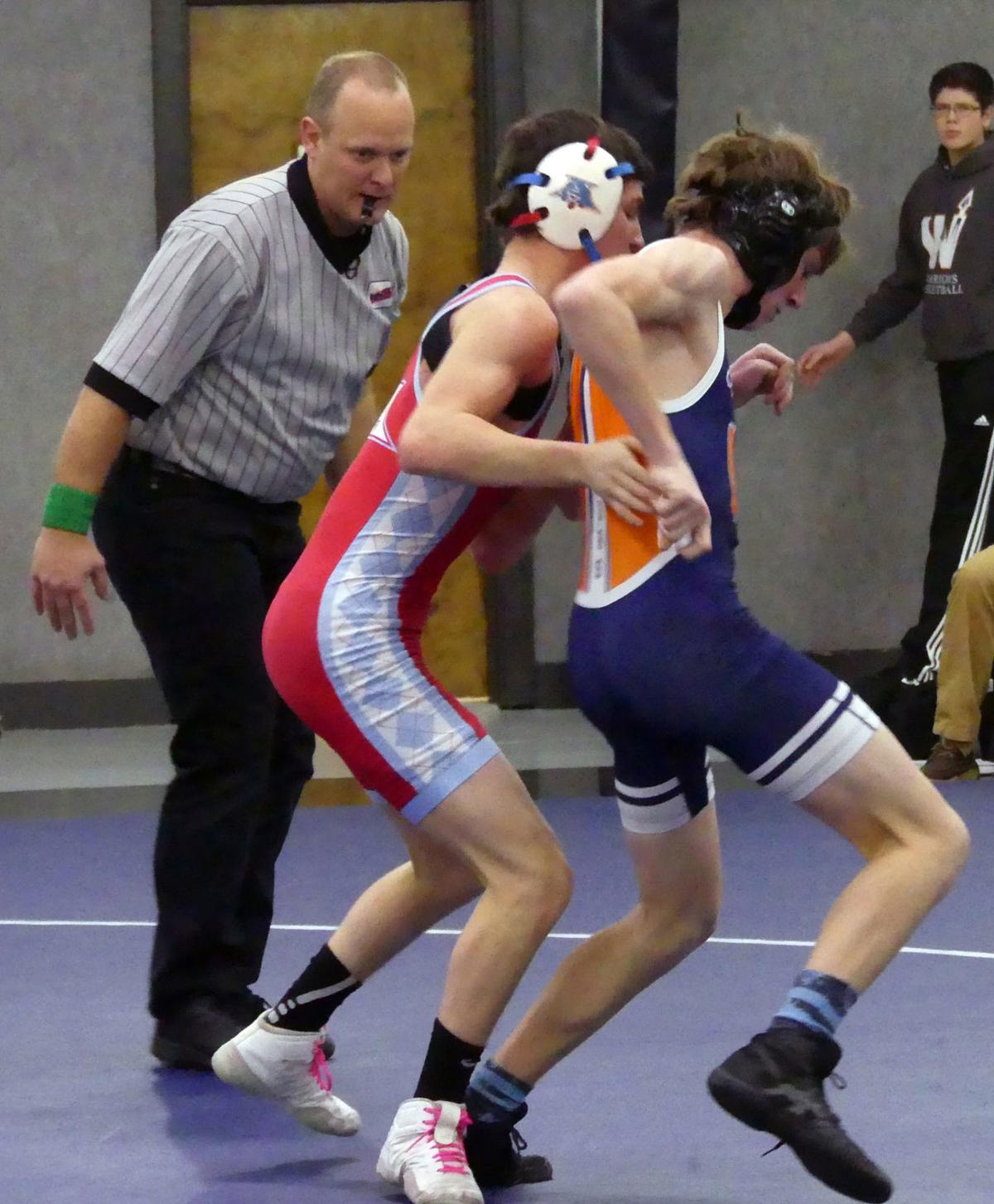 Grace Christian’s Nate Reid (right) takes on an Alleghany wrestler Tuesday, Feb. 4, 2020, in the Grace Christian School Activities Center. Although Reid lost his matchup, he made history in becoming the first ever wrestler to compete on Grace’s home turf. 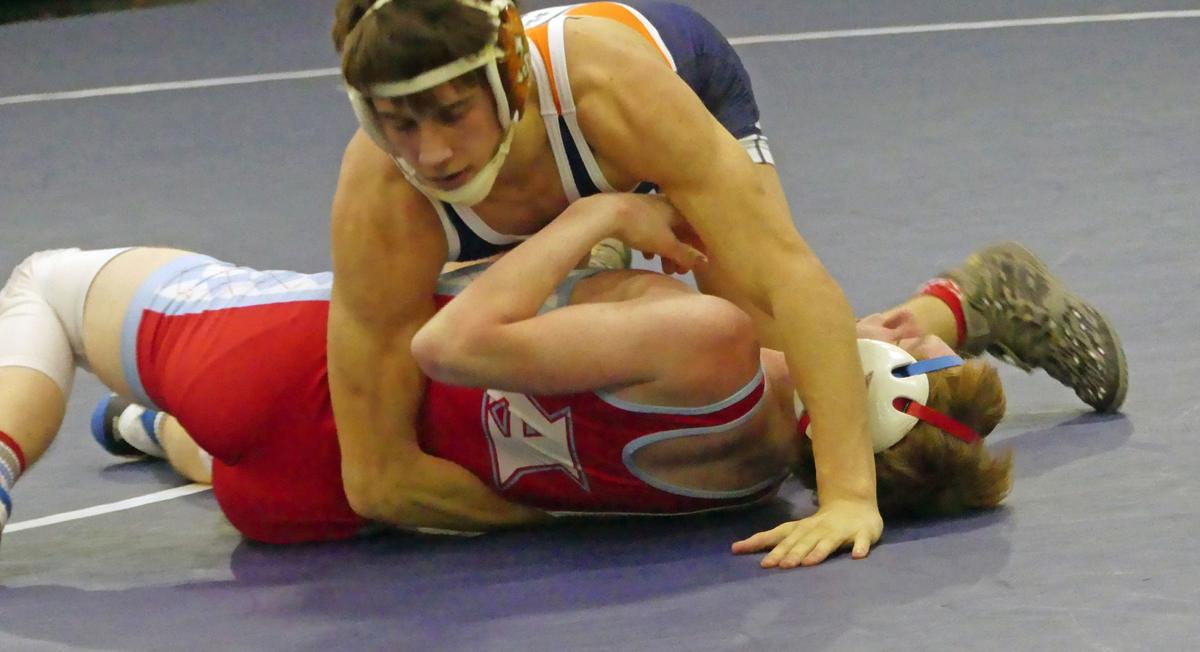 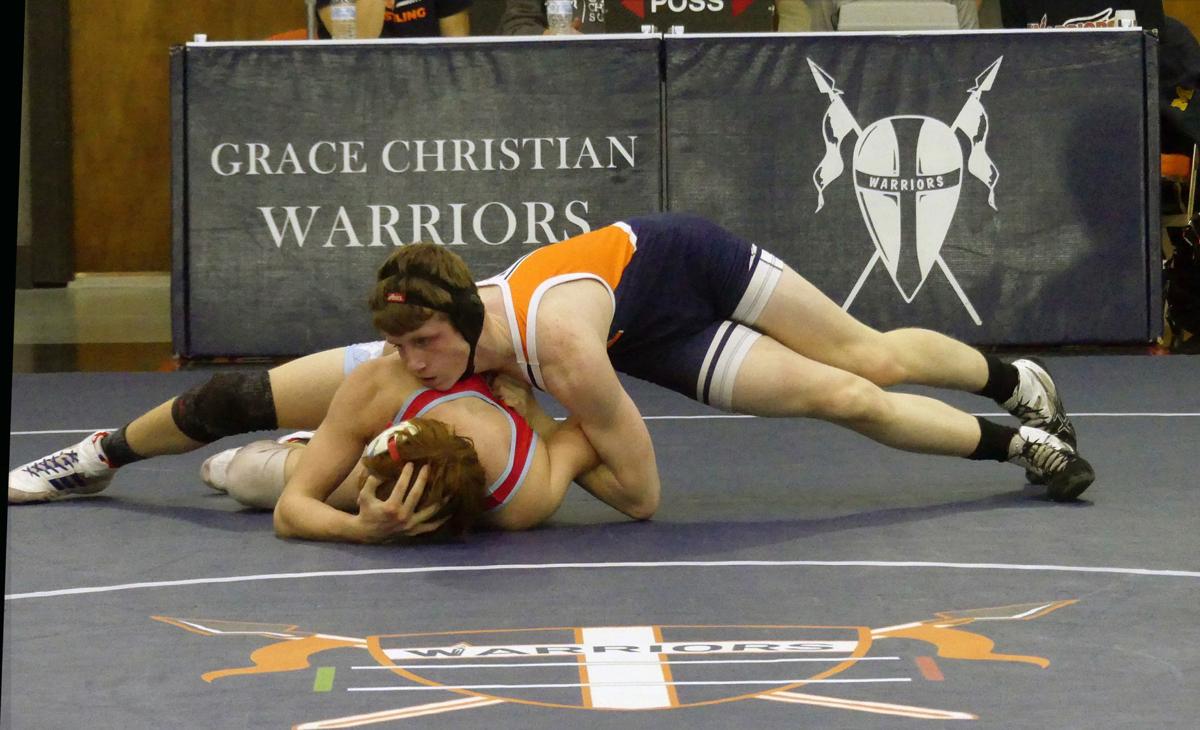 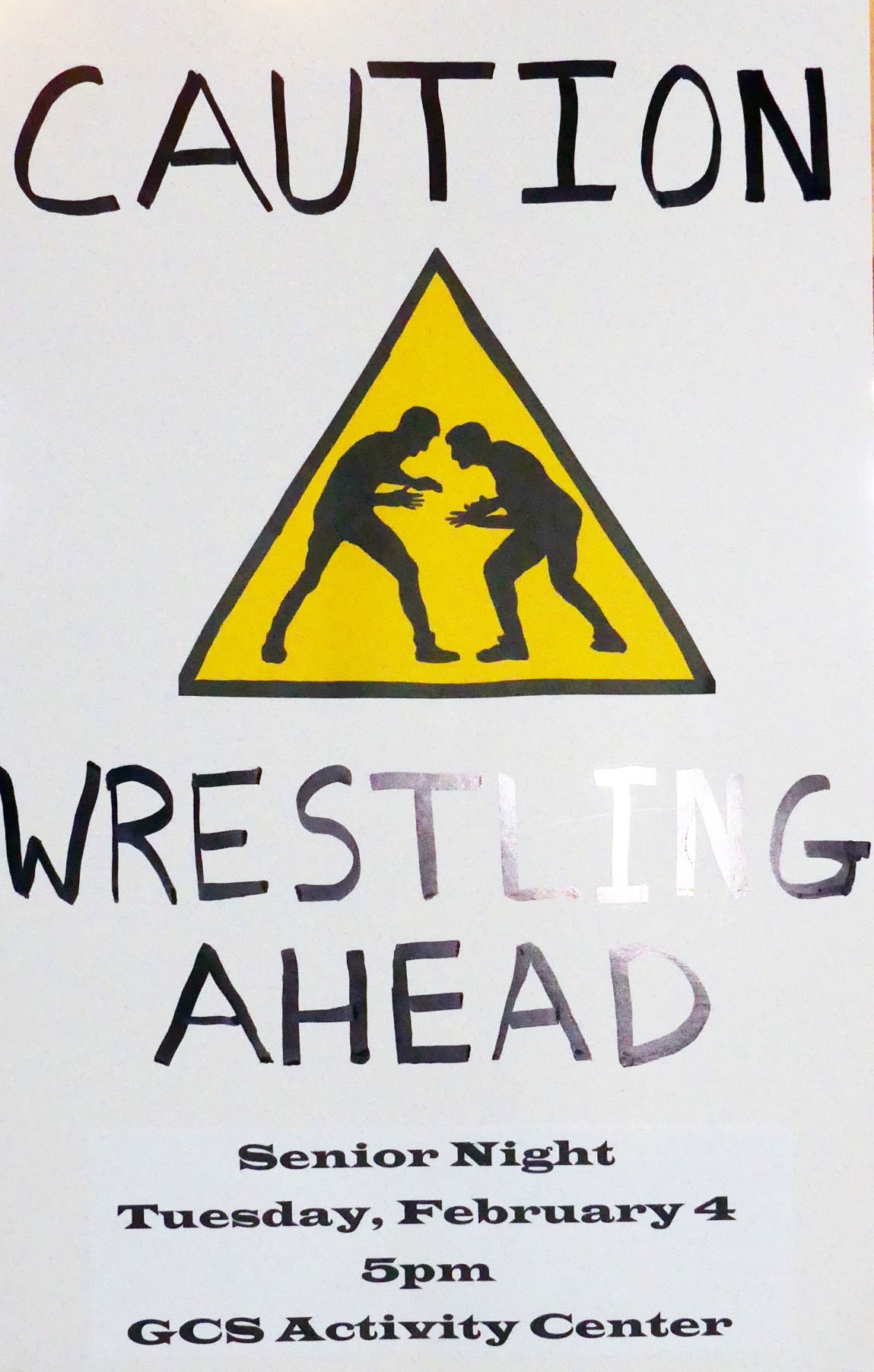 Sign on the door of the Grace Christian School Activities Center on Tuesday, Feb. 4, 2020. 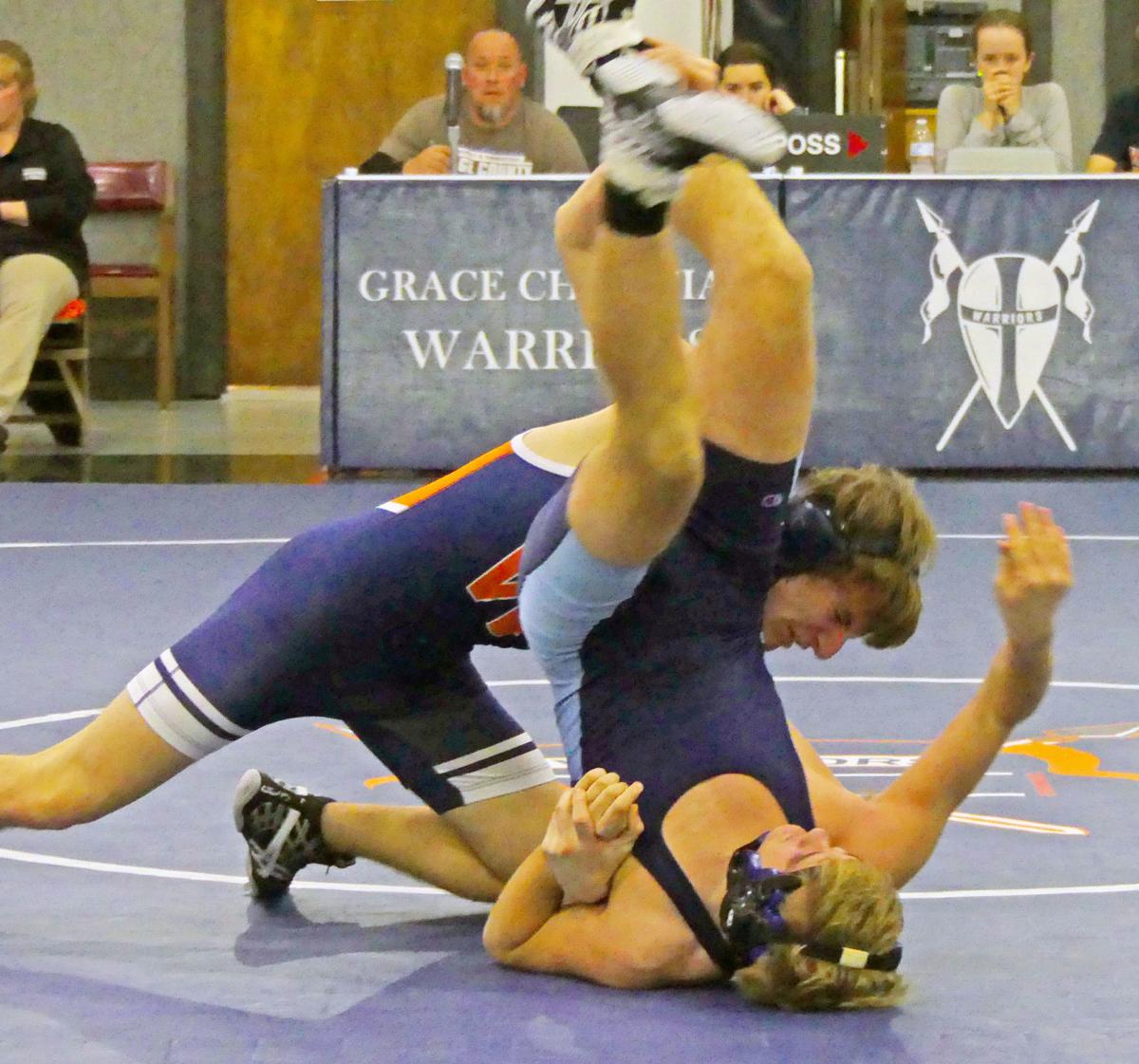 Grace Christian’s Nate Reid (right) takes on an Alleghany wrestler Tuesday, Feb. 4, 2020, in the Grace Christian School Activities Center. Although Reid lost his matchup, he made history in becoming the first ever wrestler to compete on Grace’s home turf.

Sign on the door of the Grace Christian School Activities Center on Tuesday, Feb. 4, 2020.

STAUNTON — The sign on the entrance door at the Grace Christian School Activities Center said it all: “Caution Wrestling Ahead.”

For the first time in the nine-year history of the school’s wrestling program, the Warriors held a home wrestling meet Tuesday. And it was senior night to boot.

The meet, which pitted the Grace Christian Warriors against visiting Alleghany and Page County High Schools, was the first time that the wrestling Warriors found themselves in front of a cheering home crowd. And it was nice, according to seniors Seth Ranck and Gus Pananas.

“It was a little nerve-racking but it was good having people coming out from the school and seeing us work,” said Pananas, who has been wrestling since he was a freshman and is a team captain.

Ranck, who has been wrestling for two years, added that he really liked having the competition in front of his friends. In fact, the gymnasium was packed and the crowd eagerly cheered on the home-standing Warriors. For the night, Alleghany topped Grace Christian 42-21 and Page 60-6. Grace, now 12-12 on the year, outwrestled Page, 54-12.

The excitement was palatable in the gymnasium Tuesday even as the teams warmed up. Fans experienced in watching wrestling competition were overheard instructing other fans about how to cheer and support the team.

A flyer was given out at the front gate denoting the various referee signals so that those new to the sport of wrestling would understand what was going on.

“This is all brand-new to us,” said athletic director Frank Kahrs.

He explained that the program had been practicing at a church in Waynesboro until this season and then hitting the road for competition. This year, because of space issues, the church was no longer able to accommodate, the team which then found itself practicing in the Grace middle school over near Gypsy Hill Park.

“This past season we needed to find a new practice location,” explained Coach Josh Palumbo.

“When all options were exhausted, we went into fundraising mode to get new mats that were much lighter and more portable and that could be rolled up each day and moved out of the way,” he said. “Due to the extreme generosity of wrestling parents and alumni, we were able to purchase mats that enabled us to wrestle at the middle school. We still have to pack them up and move them to our activity center to host a match, but that is a much easier task than getting old, heavy mats from Waynesboro to Staunton to host meets.”

Although having a home meet is something new, wrestling has been a part of the school’s athletic program for nine years. Coach Palumbo, who has been with the program from the beginning and is a wrestler himself, started the program at the request of a parent whose son was a wrestler. Initially there were five wrestlers, but the program has grown every year. This year there are 12 high school wrestlers and nine wrestlers in the new middle school program.

Despite drawing from a small student population — the high school only has about 100 students — the wrestling program has been successful. Currently it is the only private school in the Valley between Roanoke and Winchester to field a wrestling team. Over the years eight Grace Christian wrestlers have won 13 Virginia Independent Schools Athletic Association state placing medals and former wrestler Sam Skillman was a National Prep All American.

On this year’s squad, Aiden Ivers has over 100 career wins and captured his weight title in the News Leader wrestling tournament this year.

The move from their Waynesboro location to the middle school forced the team to rethink things and a group of parents and wrestling alumni set about the task of buying those lighter mats (the old ones weighed 2,000 pounds). They raised about $11,000 to purchase their new mats that weigh a total of only 800 pounds, and more importantly can be taken apart to be transported.

Palumbo pointed to assistant coach Lou Cozzolino, whose son Daniel is a wrestler, as being the person who spearheaded the fundraising efforts.

“It has been good for the kids,” said Cozzolino of the new mats and of being in front of a home crowd.

“The kids work so hard and so it is good for the others in the school to see the amount of time and sweat that has been poured into this program,” he said.

“The Lord had a huge part of it as well,” he added. “I have seen him move in my son’s life and in the team’s life. It is more than just wrestling.”

Even though the mats didn’t come in until late in the season, the entire Grace community jumped in to celebrate Tuesday’s first home competition. Taylor Sayre, the girls’ varsity soccer coach, encouraged her team to attend, and the boys’ basketball coach did as well.

“All these guys (wrestlers) support us and now when they finally are at home, we should support them. We are one team as a school,” she said. “We finally get an opportunity to see and appreciate all the hard work that these boys put in.”

With their inaugural meet under their belts, Coach Palumbo took a little time to reflect on what this means for his team that put in 2,400 miles on the road last year.

“It was good to have the crowd cheer for us,” he said. “The kids were a little more nervous than usual, but it was nice. We are used to being everyone else’s senior night and tonight we could have our own!”

Photos: Grace Christian has a mat of their own