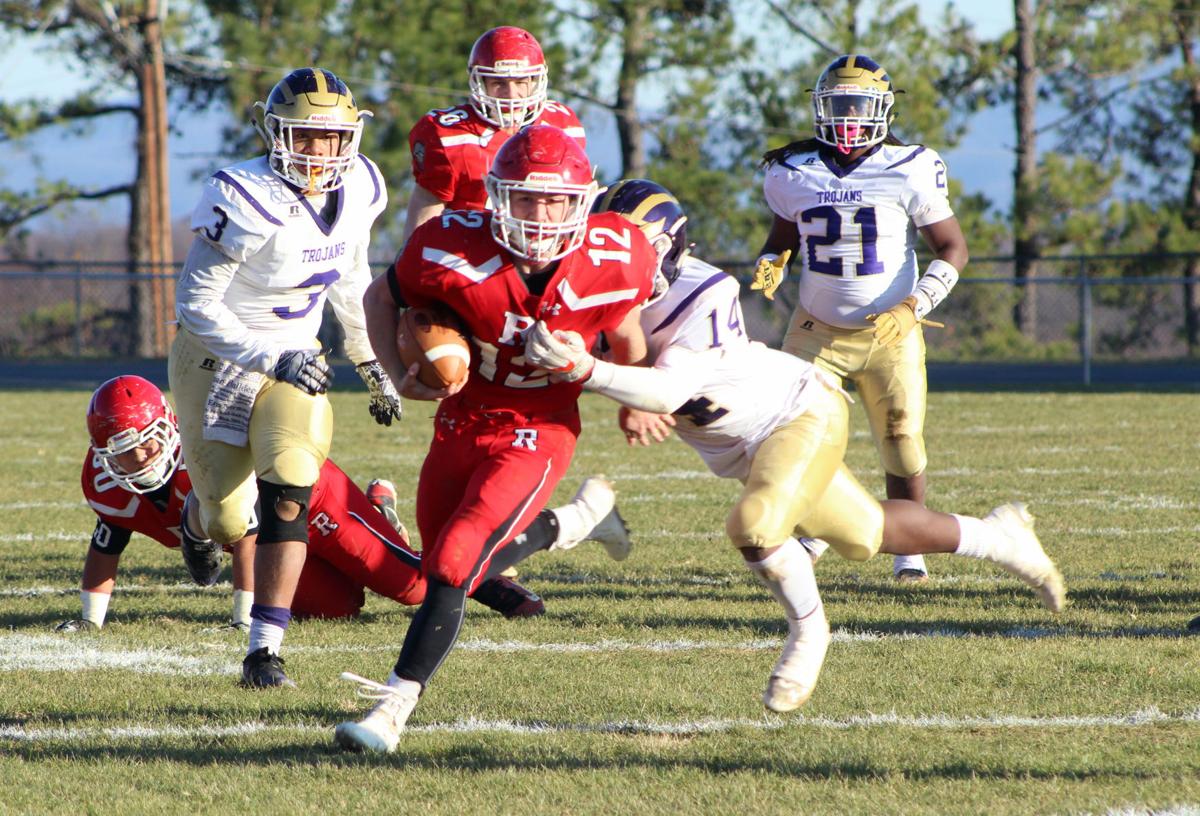 Riverhead’s Cy Cox breaks away from an Essex defender during a VHSL Class 1 semifinal matchup against Essex in Greenville on Saturday. Riverheads won, 56-15. 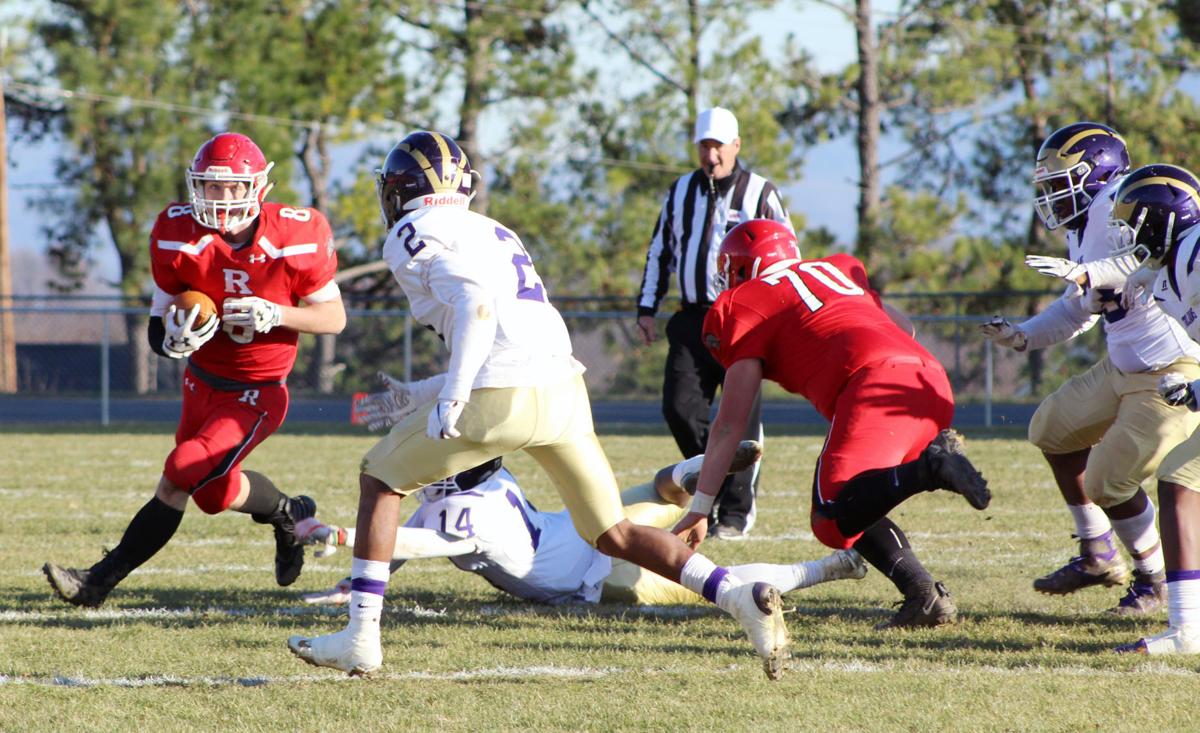 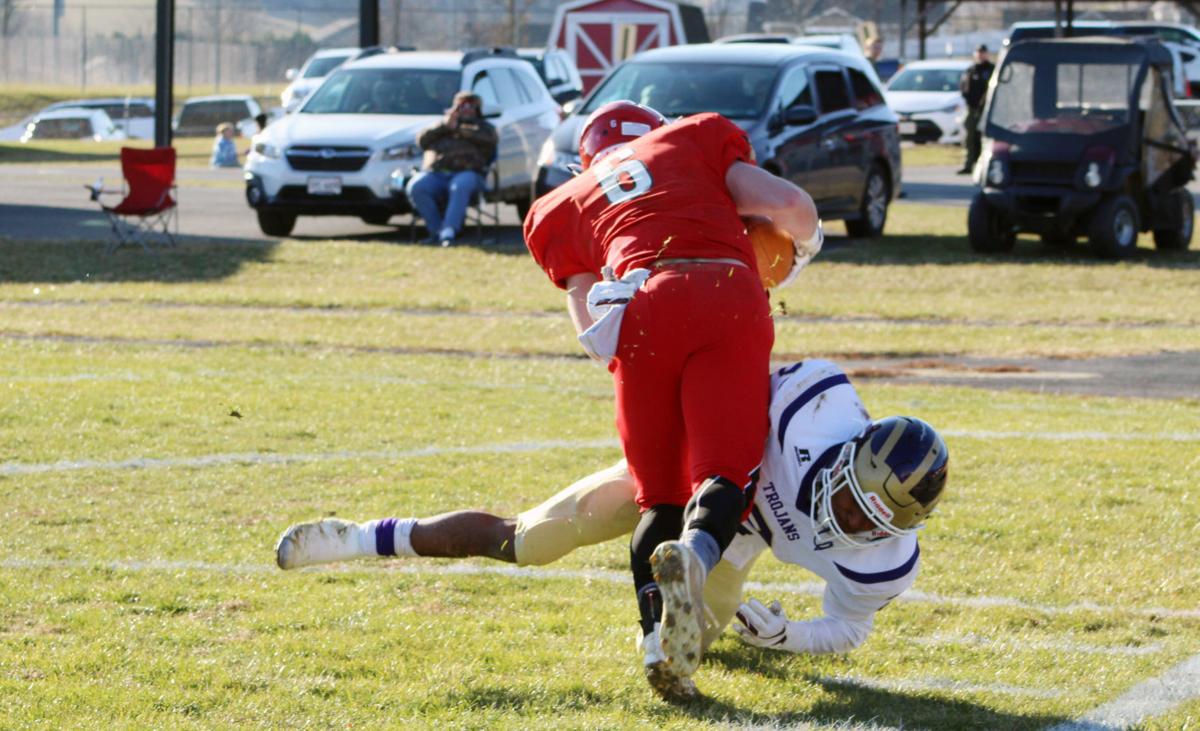 Riverhead’s Braeson Fulton plows into the endzone for the Gladiators during a VHSL Class 1 semifinal matchup against Essex in Greenville on Saturday, Dec. 7, 2019. Riverheads won, 56-15.

Riverhead’s Cy Cox breaks away from an Essex defender during a VHSL Class 1 semifinal matchup against Essex in Greenville on Saturday. Riverheads won, 56-15.

Riverhead’s Braeson Fulton plows into the endzone for the Gladiators during a VHSL Class 1 semifinal matchup against Essex in Greenville on Saturday, Dec. 7, 2019. Riverheads won, 56-15.

The Gladiators clinched their fifth straight trip to the Class 1 title showdown Saturday with a resounding 56-15 crushing of the Essex Trojans in a state semifinal mismatch.

The win marked the fourth consecutive season the Gladiators eliminated the Trojans, the last three in the semifinals. All told, Riverheads outscored Essex 139-35 in the four meetings.

Riverheads (14-0) goes for its fourth straight state championship next Saturday at high noon at Salem Stadium against old foe Galax, which dominated previously unbeaten Patrick Henry-Glade Spring, 41-16, in the other semifinal.

Galax (13-1) and the Gladiators have history at the state level. The Maroon Tide are the last, and only, team to ever beat Riverheads in a state championship, which came in 2015.

The Gladiators scored on the last play of regulation in that game, but the two-point conversion pass fell incomplete as Galax escaped 7-6. Riverheads got a heaping measure of revenge in the 2016 state semifinals, routing the Maroon Tide 63-21 on their home turf. It’s only fitting the two best Class 1 teams in the state, who have been on a collision course all season, are going to settle it for a title.

Riverheads’ 25th straight victory tied the school record, which was set bridging the 2010 and 2011 seasons.

The record-tying performance came with little resistance from an Essex team that had thrived on its high-octane offense to overwhelm the opposition. The Gladiators’ suffocating and opportunistic defense stifled the Trojans at will, holding them to 282 yards of total offense, while intercepting three passes. The starting unit only allowed one touchdown.

“I can’t say enough about the defensive effort,” Riverheads head coach Robert Casto said. “To hold down a team with that much athleticism, skill and speed is special. We did a great job getting after the ball. Coach (Ray) Norcross and the position coaches had the guys ready to attack that offense.”

The defense set the tone on the game’s first series, and Riverheads was on its way to another postseason shellacking in less than three minutes.

The Gladiators delivered a devastating roundhouse punch to send Essex reeling before the fans were hardly settled in. After Elijah Dunlap intercepted an Essex pass at the Gladiators’ 10, Zac Smiley took Riverheads’ first offensive snap off tackle and raced untouched 90 yards for the touchdown and a 7-0 lead after Peyton Skillman’s first of eight PATs at the 9:14 mark.

“Essex had stacked the line, and once he got through, it was open field,” Casto said. “That play also had a drawback as it kind of sapped the energy from Zac.”

But not to worry as the Gladiators have a stable of running backs that can do plenty of damage. The Trojans found out the hard way.

“Essex was determined to stop Zac,” Casto said. “But we have other guys that are capable, so it’s pick your poison.”

Cy Cox, who had a monster game on both sides of the ball, took the load off Smiley by rushing for 92 yards, while Cole Burton had 95 yards, all in the second half when Casto switched his backfield personnel that also inserted Braeson Fulton.

“We needed a different tempo in the second half,” he said. “We had to hit with quicker stuff. Burton gives more quickness at fullback and Fulton some more speed. It is a luxury to have so many guys that can rotate in the backfield.”

The backfield rushed for 424 yards with Smiley leading the charge with 122 on only 11 carries.

After Riverheads’ quick-strike touchdown, it only got worse for the Trojans as the Gladiators added two more first-quarter scores for a 21-0 advantage after 12 minutes. Noah Smiley’s 39-yard run on Riverheads’ second possession increased the lead to 14-0 before Cox had a 35-yard pick-6 off a deflected pass with eight seconds left in the period. Cox’s interception came on the second play after the Essex defense stopped the Gladiators on downs at the Trojans’ 37.

“Cy’s interception gave us back some momentum,” Casto said. “That was a pivotal sequence after they had stopped us.”

Essex, which had a TD pass called back by an illegal shift in the first quarter and eventually had to give the ball up on downs after a sack, got a short-lived glimmer of hope by forcing Riverheads to punt for the first time in the postseason, gaining possession at the Gladiators’ 24 after the short kick. The Trojans scored on a 3-yard pass on fourth down, and converted the two-point pass for a 21-8 deficit with 5:46 left in the half.

The Trojans forced back-to-back punts, and drove to Riverheads’ 34 before a holding penalty and two sacks pushed the ball back into Essex territory, setting up a punt with under a minute.

Riverheads can do a lot with little time on the clock.

The Gladiators put the final nail in the coffin with another last-second TD when Dunlap hit Fulton on the fly pattern down the right sideline for a 44-yard strike just five seconds before the half. Riverheads had taken possession of the ball at its own 35 with 44 seconds left, and needed just two plays, the first a 21-yard run by Cox, for a commanding 28-8 advantage at the break.

“That was a great catch,” Casto said. “It was thrown in the perfect spot where it was either going to be caught or not. That to me was the biggest play of the game.”

After Essex blocked a 36-yard field goal attempt on Riverheads’ first drive of the second half, the Gladiators responded on their next possession. Burton’s first carry of the game covered 58 yards to the Trojans’ 22. Three plays later, Zac Smiley walked in from 3 yards out for a 35-8 cushion with 1:01 left in the third quarter.

Cox’s second interception, which came on the first play following the kickoff, set the Gladiators up for their sixth TD. On the first snap after a pass interference penalty had nullified an Essex interception on fourth-and-5 at the Trojans’ 24, Fulton scooted in from the 12 as the lead grew to 42-8 with 10:22 remaining.

Essex couldn’t get a handle on the squib kickoff, and the Gladiators pounced on the ball at the 27. Burton covered the final 19 yards for the TD.

After Essex scored against the defensive reserves, the offensive reserves returned the favor when backup quarterback Bennett Dunlap scored from 1 yard out in the final minute.

“It is great Stuarts Draft will also be representing Augusta County,” Casto said. “I think it shows pretty good football is played around, and for both of us to be from the same district. It says a lot about Coach (Nathan) Floyd and the job he has done over there. Today was a huge day for both of our programs and schools. Hopefully we can bring two titles back to the county.”