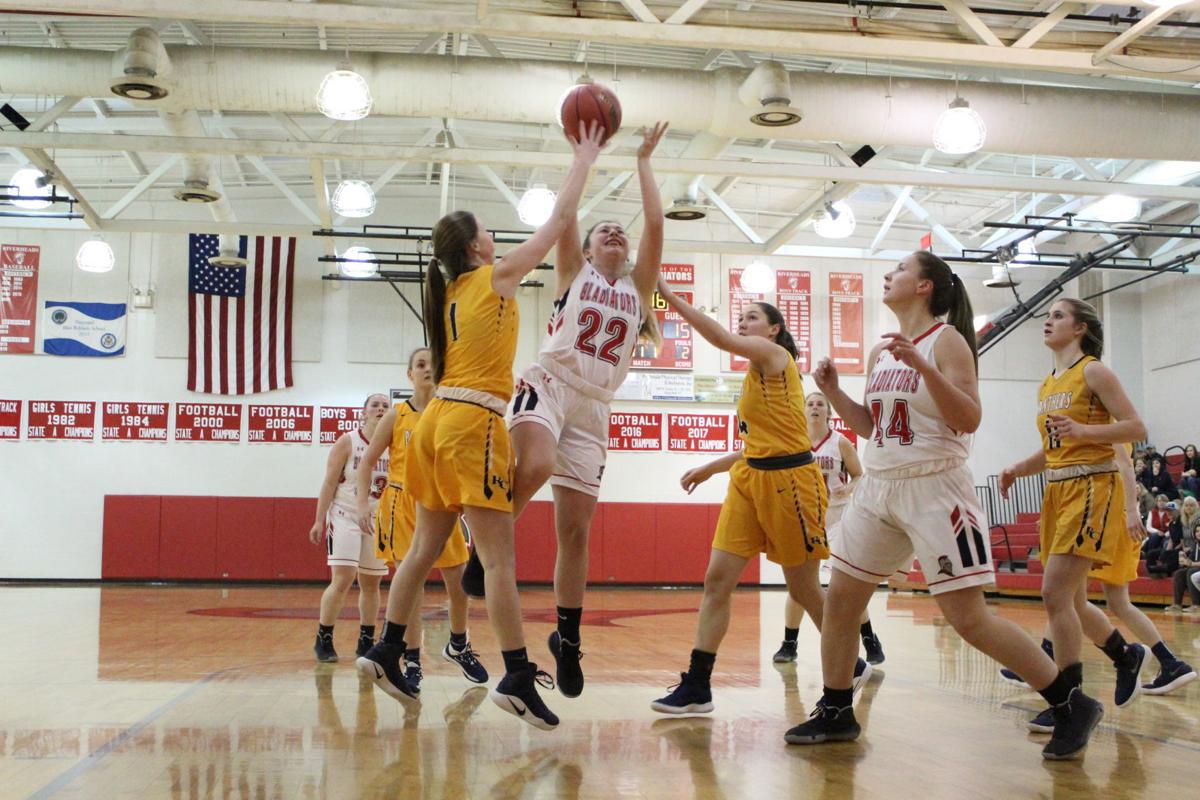 Riverheads’ Hannah Hoosier pushes to the hoop in Region 1B action against Rappahannock at Riverheads High School on Monday. 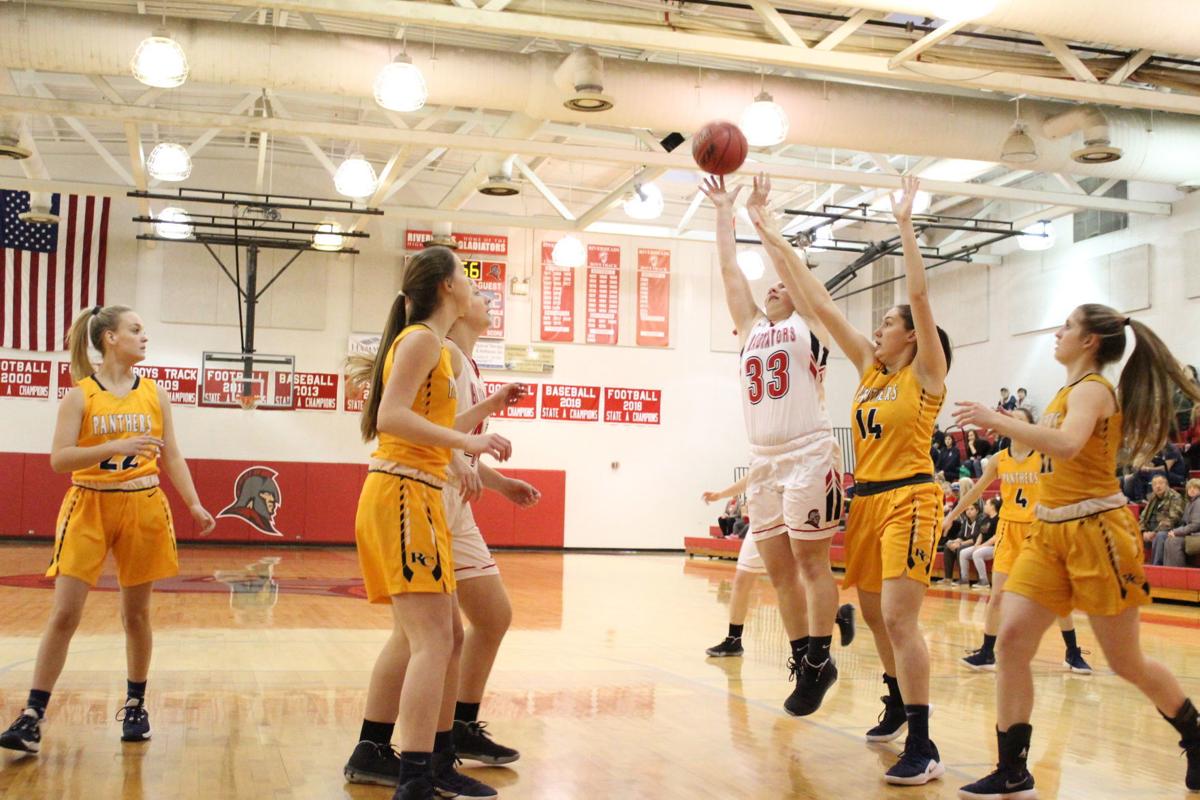 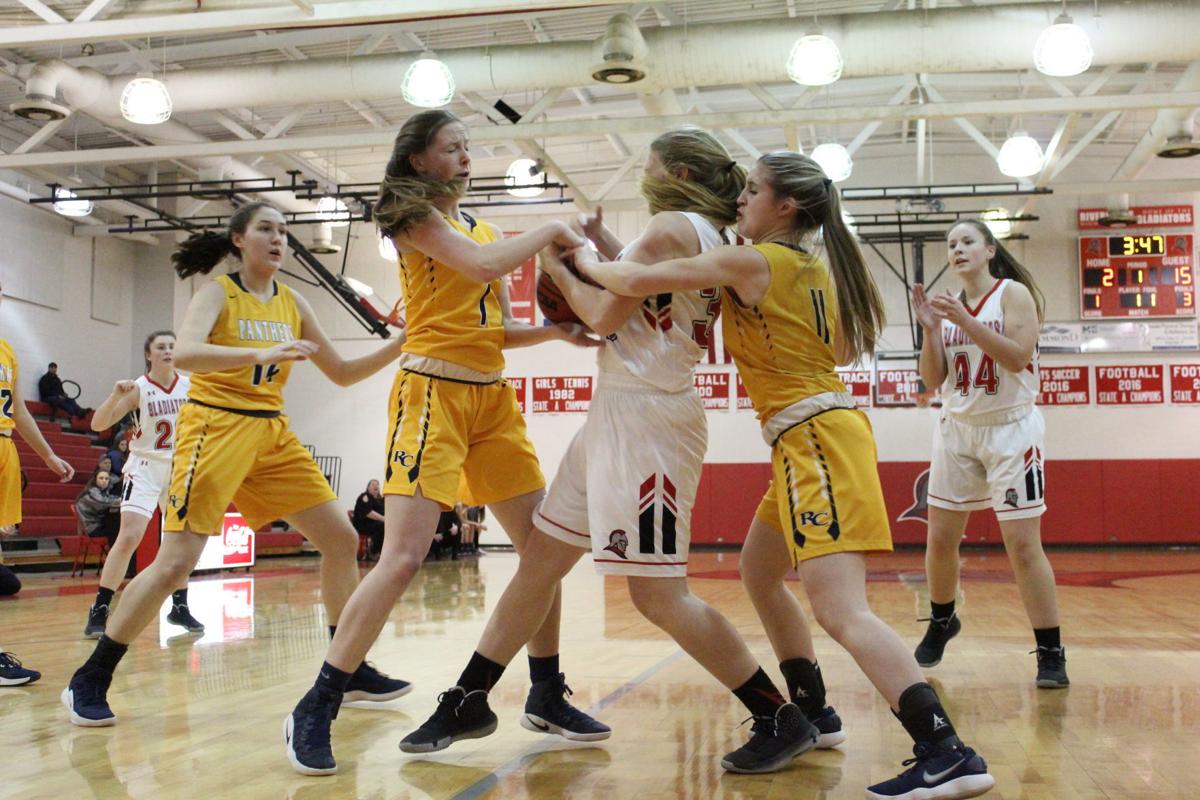 Riverheads’ Sarah Campbell fights for possession against two Rappahannock County players during the Region 1B quarterfinals at Riverheads High School on Monday, Feb. 24, 2020.

Riverheads’ Hannah Hoosier pushes to the hoop in Region 1B action against Rappahannock at Riverheads High School on Monday.

Riverheads’ Sarah Campbell fights for possession against two Rappahannock County players during the Region 1B quarterfinals at Riverheads High School on Monday, Feb. 24, 2020.

GREENVILLE — It is never ideal to spot the opposing team a 15-0 lead in a win-or-go-home game, and expect to play another day.

But Riverheads bucked the traditional wisdom Monday night behind a blurry-eyed shooter to keep its girls basketball season alive.

The Gladiators stormed back from the deep deficit behind the 3-point shooting of Hannah Grubb to knock out the Rappahannock County Panthers 51-41 in the quarterfinals of the Region 1B tournament.

Grubb took a hard elbow below her right eye early in the first quarter, leaving it swollen and a good-sized knot underneath it. But the impaired vision did not slow her down.

All the junior guard did in the second quarter was drill four long 3s that helped rally the Gladiators from the 15-point deficit to a 30-25 halftime advantage. Those were the only baskets Grubb hit in the game, but they were the difference-makers.

“I wasn’t seeing all that great out there, but I knew we were in trouble,” Grubb said. “None of us wanted to end the season like this.”

Grubb knows her eye is going to look ‘pretty ugly’ come Tuesday morning, but she didn’t care because the team lived to fight another day.

That day is going to be Wednesday when the Gladiators host third-seeded Cumberland in the regional semifinals with a berth in the Class 1 state tournament on the line. Cumberland earned its trip to Greenville for the 6 p.m. showdown by ousting sixth-seeded Sussex Central 48-37.

The Gladiators had hit a rough patch coming down the stretch of the regular season, losing five of six, but finished strong with road wins at Region 2B playoff teams Buffalo Gap and Stuarts Draft.

Unfortunately, Riverheads (13-8) didn’t carry that late-season momentum into Monday. The Gladiators, who hadn’t played since Feb. 13, watched the Panthers unleash a barrage of four straight 3-pointers, the last three by Olivia Atkins, including the rare four-play play, for a startling 15-0 lead less than four minutes into the game. The sense of unease was palatable in the Riverheads faithful.

“That was scary,” Riverheads first-year coach Preston Woods said. “We knew they were a streaky shooting team. During the timeout, I told the girls to play one possession at a time. You can’t score 15 points on one possession.”

Woods also switched defenses, going to a box-and-one on Atkins, who never scored another field goal, although she was fouled a total of four times shooting from behind the arc.

“We switched defenses a few times and that seemed to take them out of their rhythm,” Woods said.

Riverheads finally got on the scoreboard when Hannah Hoosier hit two free throws at the 4:17 mark. That started a 9-0 spurt, which included four points from Berkeley Tyree, to get the Gladiators back in contention.

Feeling better to be down only 17-9 after the first quarter, Grubb and her eye, which she iced for most of the opening period, unleashed fury on the Panthers. She nailed two 3s during an 11-0 burst that propelled the Gladiators to their first lead of the night at 22-19.

“That was a total team effort to bring it back together,” Woods said. “We could have quit in the early going.”

The Gladiators forged ahead 38-28 at the 2:17 mark of the third quarter after a stickback by Tyree and Savanna Crawford’s short jumper. However, the Panthers stayed in the game by scoring the last six points for a 38-34 deficit.

But Riverheads sealed the deal, outscoring the Panthers 9-2 to begin the final period.

After the initial 15-point barrage, the Panthers got outscored by Riverheads 51-26 the rest of the game.

“Everybody did their part and played hard,” Woods said. “We got great bench play and we shared the ball. That was our best rebounding effort of the season. We didn’t give up many offensive boards and did a great job of hitting the offensive glass on our end.”

Seventh-seeded Rappahannock County (7-16) came into regional play with the wheels wobbling, losers of four straight and eight out of 10.

The Panthers had another athletic season end at the hands of Riverheads as the one-win football team got ousted by the powerhouse Gladiators, 45-0, in the Region 1B quarterfinals in November.