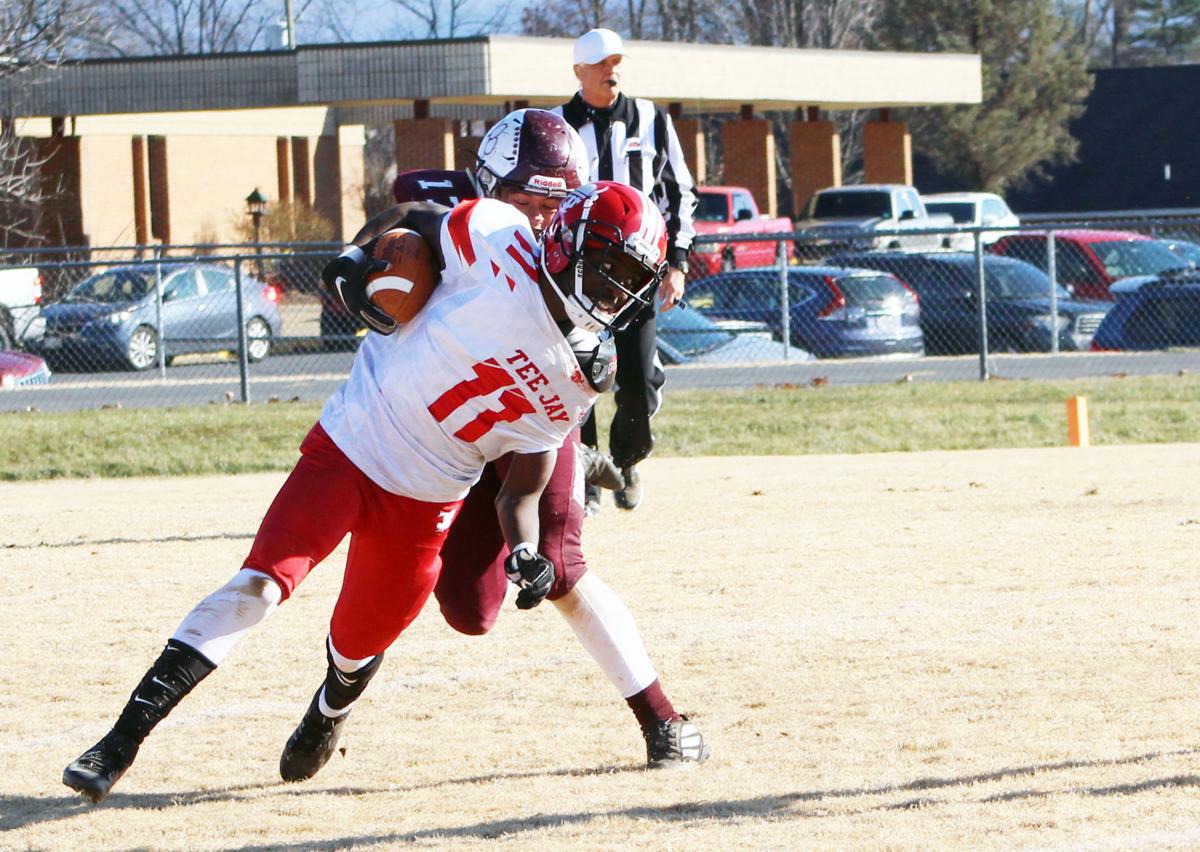 Thomas Jefferson’s Dahsean Smith is taken down by Stuarts Draft’s Kasey Branch during the VHSL Class 2 semifinal game in Stuarts Draft on Saturday. 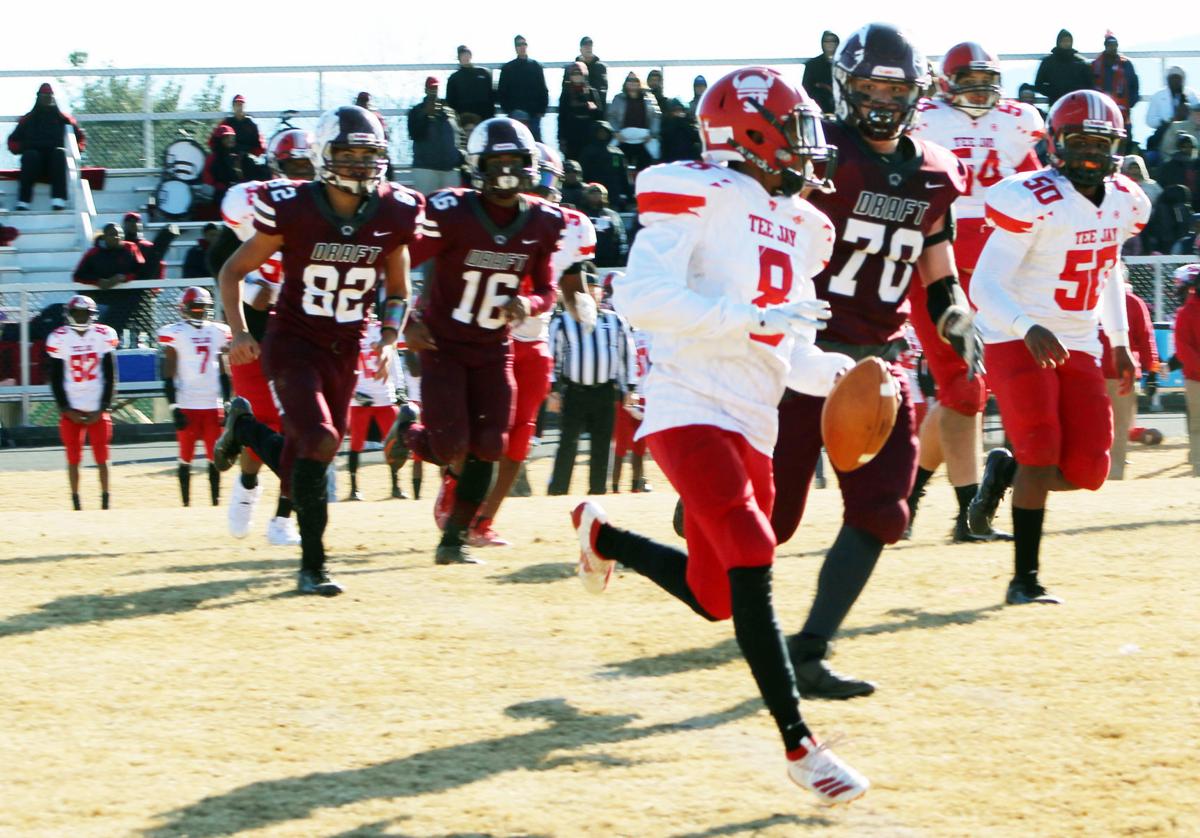 Stuarts Draft’s Jace Parson (70) goes in for the tackle on Thomas Jefferson’s Ron Rhone during the VHSL Class 2 semifinal game in Stuarts Draft on Saturday. 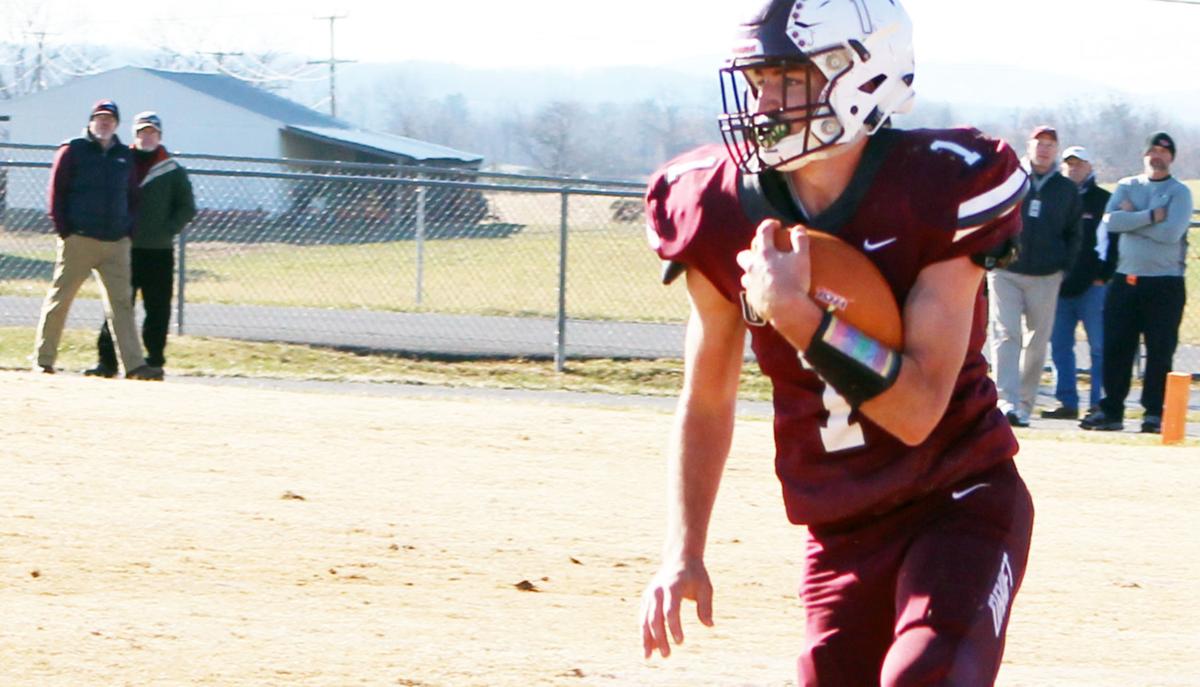 Thomas Jefferson’s Dahsean Smith is taken down by Stuarts Draft’s Kasey Branch during the VHSL Class 2 semifinal game in Stuarts Draft on Saturday.

Stuarts Draft’s Jace Parson (70) goes in for the tackle on Thomas Jefferson’s Ron Rhone during the VHSL Class 2 semifinal game in Stuarts Draft on Saturday.

STUARTS DRAFT — For the first time in school history, the Stuarts Draft High School football is playing for a state championship.

With Saturday’s 49-7 semifinal win over visiting Thomas Jefferson, the Cougars punched their ticket to the title game.

A dominating performance on both sides of the ball overwhelmed the Vikings, who won the Region 2A championship last week.

The Vikings (11-3) tied the game on a kickoff return for touchdown after the Cougars’ first touchdown, but the Draft defense shut out their opponents from that point on.

The Vikings couldn’t stop the Cougars’ run game as both Blake Roach and Dustyn Fitzgerald ran for more than 100 yards.

Thomas Jefferson marched right down the field on the first possession of the game, going 61 yards on 13 plays. But the Cougars’ defense stopped them on the Draft six, forcing a field goal attempt which missed.

The Cougars took over and put together an impressive drive of their own, with a heavy dose of Roach, who was returning to the backfield from injury. Roach blasted in from the Vikings’ two and Tyler Lingenfelter converted the kick with 1:22 remaining in the first quarter.

That would prove to be the last time in the contest that the Cougars didn’t lead.

The Vikings appeared ready to take control, recovering a Fitzgerald fumble, but the Draft junior running back turned the tables and intercepted Ron Rhone’s pass, returning it all the way back to the visitors’ one-yard line.

From there, Watkins scored the first of his four touchdowns on the day. Lingenfelter’s kick was good and Draft went up 14-7.

The Cougars scored twice more in the second period, with Watkins doing the honors both times from the Vikings’ nine and again from the five.

“I didn’t think I’d get to run this much,” Watkins said.

The versatile senior normally plays wide receiver, and fills in for Henry Cooke at quarterback and also is the team’s punter.

The Cougars continued their domination in the second half as Watkins scored from the one and Roach added another score from the five.

Stuarts Draft, now with a running clock, scored its final TD on a blast from Latrell Fomby with 7:15 remaining in the game.

In the final moments of the game, the Cougars came up with fumble recoveries from Austin Duff and Keshawn Winston.

Roach ran for 163 yards on 23 carries and two TD’s, while Fitzgerald added 109 yards on 11 carries. Watkins finished with 39 yards on eight carries with four TD’s and a two-point conversion. Sophomore Aaron Nice added 44 yards on five carries and Fomby ran twice for 10 yards and a touchdown.

Cooke only attempted one pass the entire game which fell incomplete.

“I’m a run-first coach and if I don’t need to pass I won’t,” Floyd said. “Blake (Roach) is a good running back and gives us depth at that position.”

The Draft defense did the rest with three fumble recoveries and an interception. Latrell Fomby had eight tackles and Kasey Branch had seven.

“The guys played selfless football,” Floyd said. “On offense, they hit every play. We needed to run quick and north-south and thought we could control the line of scrimmage.”

The Cougars’ super-power offense opened up holes for the backs to run inside.

The Cougars now face Appomattox in the state final at Salem at 4 p.m. on Saturday.